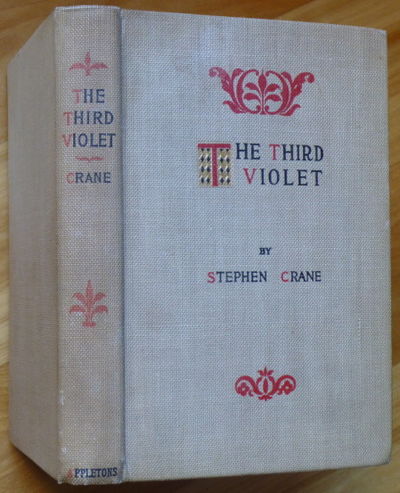 by Crane, Stephen
1897. New York: D. Appleton and Company, 1897. Original tan cloth decorated in red, black and gilt. First Edition of Crane's sixth book, a romance about young impoverished artists. It was not long after he finished writing this, and before it was published, that Crane was ship­wrecked near Jacksonville, as he was headed off to cover the war in Cuba (Crane had to spend three days in an "open boat"). THE THIRD VIOLET was something of a success, but artistically it seemed a distinct blot on Crane's reputation... [One reviewer observed,] "We hope that THE THIRD VIOLET, which is a hopelessly scentless one, will be the last of its kind, and that instead of violets Mr. Crane will give us war -- war -- war." [Stallman] This was to be the last of Crane's four Appleton books to appear in this tan binding. This copy is in fine condition, with very little of the cover soil and darkening that is typical for this light-colored binding. Williams & Starrett 13; Blanck 4078. (Inventory #: 14425)
$475.00 add to cart or Buy Direct from
Sumner & Stillman
Share this item