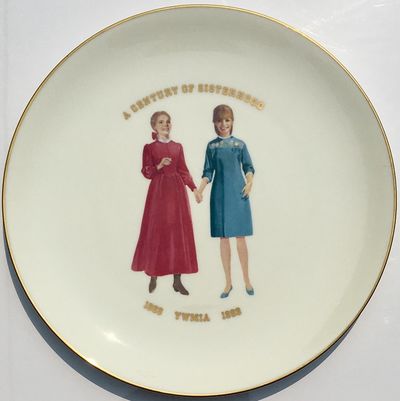 by [Young Women's Mutual Improvement Association]
[Nagoya, Japan]: Narumi Fine China, 1969. 29 cm diamter Gold border on bone china with an image of two women at the center, one in a pioneer dress and the other in a groovy light blue dress. In fine condition with faux wood stand. Commemorative plate produced to celebrate the 100th anniversary of YWMIA.

"An elaborate June Conference was held in 1969, with many foreign countries represented. An early morning reception on Temple Square was followed by banquets, dance festivals, musicals, dramatic readings, road show presentations, camp training in the nearby mountains, athletic seminars, and testimony meetings. The final general session was held in the Tabernacle on Sunday." - p.1618 'Encyclopedia of Mormonism'. (Inventory #: 1537)
$40.00 add to cart Available from
Tschanz Rare Books
Share this item

Ephraim, UT : Christensen , 1905
(click for more details about Thomas Christensen)
View all from this seller>