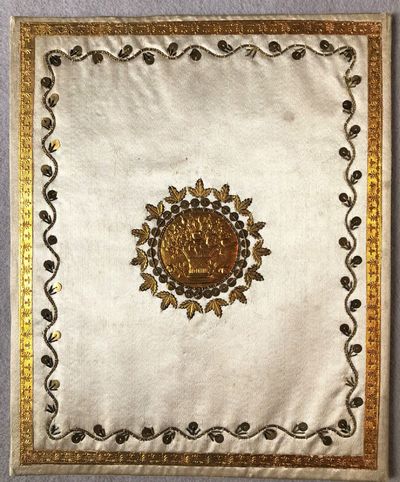 by SAPPA DE MILANESI, Carlo Giuseppe, (1788-1834), Bishop of Acqui
Acqui: Carolo Oddicini, 1821. 4to (binding size 253 x 207 mm). 8 pages, printed on yellow paper. Drop-title, large woodcut arms of the Bishop of Acqui. Case binding of white velvet over pasteboards, decorated with metallic thread and gilt and silver-gilt appliqués, both covers with outer border of a gilt and gauffred textile or paper strip, inner border of couched silver thread in a wavy line imitating a vine with "leaves" of purl and silver sequins, at center a large gilt plaque roundel gauffred with flower vase in relief, surrounded by a ring of sequins under couched metallic thread and an outer circle of small gilt grape leaf appliqués (small rectangular darkened area on front cover from a removed library label, front cover central roundel slightly more oxidized than lower cover). Provenance: from the collections of the Dukes of Genoa, dispersed in the 20th century. ***

A pretty Piedmontese silk binding on a pastoral letter from the Bishop of Acqui (now Acqui Terme). Dated October 5, 1821, the brief is a panegyric of the reigning secular powers, the Princes of Savoy, who were in the midst of tumultuous times. Mentioned are the recently abdicated king Vittorio Emanuele I, and Carlo Alberto of Savoy, father of the future king Vittorio Emanuele II. The latter had recently ceded to pressure by his family and renounced his support of a group of rebels who were conspiring to install a constitutional monarchy. (Inventory #: 4042)
$1,250.00 add to cart or Buy Direct from
Musinsky Rare Books
Share this item