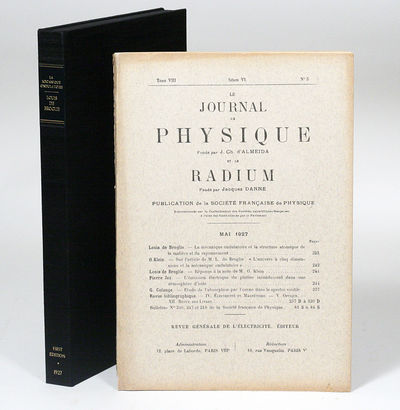 by BROGLIE, LOUIS-VICTOR DE
Paris: Journal de Physique et le Radium, 1927. FIRST EDITION. Original wrappers. Very Good. FIRST EDITION IN RARE ORIGINAL WRAPPERS of the presentation of de Broglie's highly influential "pilot-wave" interpretation of quantum mechanics. "What we now know as pilot-wave theory first appears in a paper by de Broglie (1927) entitled 'Wave mechanics and the atomic structure of matter and of radiation', which was published in Journal de Physique in May 1927... In 'Structure', de Broglie presents a theory of particles as moving singularities. It is argued, on the basis of certain assumptions, that the equations of what we now call pilot-wave dynamics will emerge from this theory. At the end of the paper de Broglie proposes, as a provisional theory, simply taking the equations of pilot-wave dynamics as given, without trying to derive them from something deeper. It is this last, provisional theory that de Broglie presents a few months later at the fifth Solvay conference..." (Bacciagaluppi and Valentini, Quantum Theory at the Crossroads). "In October 1927, some of the greatest minds in physics gathered for the Fifth Solvay International Conference to debate the troubling implications of the then-nascent theory of quantum mechanics. A particularly contentious topic was the perplexing 'wave-particle duality,' in which objects we typically think of as particles-like photons and electrons-exhibit wave-like properties as well, and things we think of as waves, like light, sometimes behave like particles. "The French physicist Louis de Broglie proposed a means by which a photon or electron could behave like both a particle and a wave, complementary aspects of the same phenomenon. He reasoned that the particles could be carried along by what he dubbed 'pilot waves'-fluid-like ripples in space and time-much like a buoys bobbing along with the tide. "Quantum mechanics seeks to describe nature at the level of individual atoms and the particles that comprise them. But when physicists began delving into this strange new realm at the dawn of the 20th century, they discovered that the old, deterministic laws of classical physics no longer apply at that scale. Instead, uncertainty reigns supreme. It is a world governed by probabilities, and many physicists found this disquieting, to say the least... "De Broglie's alternative pilot wave theory was an attempt to restore [the] underlying solid reality. Instead of the wave function, de Broglie's pilot wave theory employs two equations, one describing an actual wave and the other describing the path of an actual particle and how it interacts with, and is guided by, the wave equation. It is deterministic, like a classical coin flip. In principle, at least, we can glean sufficient information to plot a particle's path, something that is not allowed in Bohr's interpretation of quantum mechanics" (Jennifer Ouellette, "Quantum Physicists Catch a Pilot Wave", Nova: The Nature of Reality). In 1952 David Bohm rediscovered de Broglie's work and further developed it. It is now known as the de Broglie-Bohm theory and is a much-debated approach to quantum mechanics today. IN: Journal de Physique et le Radium, Ser. VI, Vol. VIII, No. 5, May 1927. Octavo, original printed wrappers; custom box. Some chips to wrappers and wear to spine; rear wrapper neatly detached along joint, but now held in place by removable mylar. RARE. (Inventory #: 2344)
$4,800.00 add to cart or Buy Direct from
Manhattan Rare Book Company
Share this item

Chicago and New York : Herbert S. Stone and Co , 1899
(click for more details about The Awakening)
View all from this seller>