Who and What are Priests 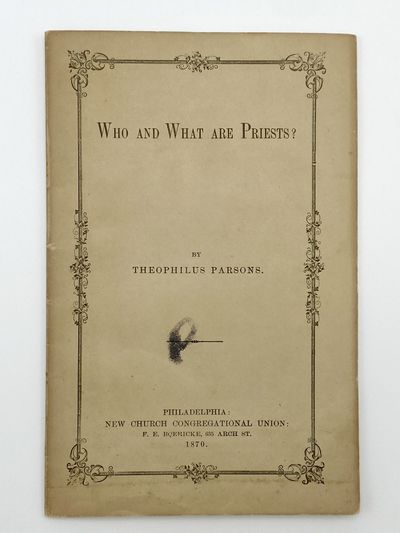 by PARSONS, Theophilus, Jr.
Philadelphia: New Church Congregational Union, 1870. A fine copy with a small black mark on front wrapper. 12mo (18.5 x 12 cm). 29 pages. Original printed wrappers. FIRST EDITION. Parsons's paper was originally printed in 'New Jerusalem Magazine.' He has added further text to correct certain misapprehensions of the original text, and to supplement it with text that would have made it too long for publication in the magazine. Parsons argues emphatically for a recognized ministry, and one that is structured on a firm organization, but, he repeats, "I want a ministry, and not a priesthood." Son of the noted Massachusetts jurist of the same name, Theophilus Parsons, Jr. was a Boston lawyer and literary figure best remembered for the legal texts he authored during his long tenure as Dane Professor of Law at Harvard. He was also a man of literary, philosophical, and religious interests, editing several journals and writing on a variety of topics (including Swedenborgianism, a preoccupation he shared with the Transcendentalists). Scarce: WorldCat/OCLC (163583416) list only one copy, at the Graduate Theological Union, Berkeley, CA. (Inventory #: 406092)
$250.00 add to cart Available from Riverrun Books
Share this item

Garden City : Doubleday , 1970
(click for more details about The Jerusalem Bible)
View all from this seller>