Eldorado; Or Adventures in the Path of Empire | Comprising a Voyage to California, via Panama | Life in San Francisco and Monterey | Pictures of the Gold Region, and Experiences of Mexican Travel [Introduction by Robert Glass Cleland] 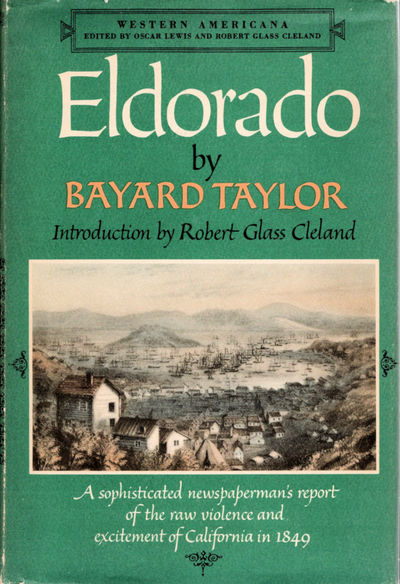 by Taylor, Bayard
New York: Alfred A. Knopf, 1949. First Edition. Near Fine/Very Good. [9.5x6.5in]; xxvii, 375 pp., 8 color plates illustrations by Author, appendix (1850 Report to Sec. of State by T. Butler King on California); Black cloth covers with gilt lettering on spine and gilt rules and illustrations on front and spine, yellow dyed top edge, other edged untrimmed; Light green dust jacket with black, white and yellow lettering on front and spine, illustration of San Francisco on front, with black floral pattern on spine, advertisements for Western Americana book series (Oscar Lewis and Robert Glass Cleland, editors) on back; Negligible shelf wear to book, light glue remains of removed bookplate on front end paper; Minor shelf wear to dust jacket with small chips to corners and edges, age darken spine and along edges, light rubbing to surfaces. [Kurutz 618, Volkmann Zamorano 80 #73]. Bayard Taylor (1825-1878) was a travel author, poet and artist. His 1850 two volume book "Eldorado" is his best known work about a trip to California at the height of 1849, the first year of the gold rush. This original edition was issued simultaneously in New York and London, and additional editions were issued over the next 30 years.This book is 1949 Western Americana series centennial edition reproduction of the 1850 edition. In the introduction by Robert Glass Cleland, "This work by an eminent writer and artist is probably the outstanding book on the early Gold Rush in California ... (Inventory #: 13752)
$58.00 add to cart Available from
David Spilman Fine Books
Share this item