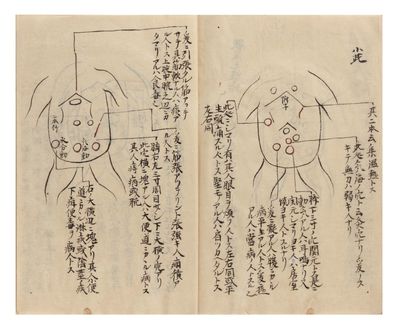 by MURAI, Kinzan
16 fine full-page brush & ink illus. 24 folding leaves. 8vo (243 x 169 mm.), orig. wrappers, new stitching. [Japan]: late Edo. A fascinating manuscript. Murai (1733-1815), was a member of one of the leading Japanese families specializing in surgery. A renowned Chinese lute player, he was physician to the Kumamoto fiefdom. Murai studied under Todo Yoshimasu (1702-73), one of the most innovative practitioners of his time. Both Yoshimasu and Murai were leaders in the development of Japanese "Kampo," the study and transformation of traditional Chinese medicine in Japan, which began in the 7th century and slowly modified itself into its own unique system of diagnosis and therapy. One of the basic Chinese texts used by Japanese doctors was the classic Shang han lun [Treatise on Cold Damage] by Zhongjing Zhang (fl. late 2nd century CE); it was carefully studied by Japanese physicians as late as 1850 (see Mestler, A Galaxy of Old Japanese Medical Books, II, p. 469). It is a book of therapeutic medicine using drugs for various pathological conditions, especially infectious diseases. In the late 17th and 18th centuries, a group of revisionist Japanese doctors (the Koho school), notably Yoshimasu and including Murai, began to reconsider the Shang han lun and rejected a number of its tenets while embracing others. One that the Japanese doctors endorsed and improved was abdominal examination as a basic Kampo diagnostic method. Yoshimasu considered the abdomen as the basis of human life and an important indicator of various diseases. Abdominal examination became essential for Kampo medicine. Its importance developed in the Nanbokucho period (1336-92) and grew throughout the Edo period. The manuscript begins with a series of 88 detailed herbal prescriptions. These are followed by 16 fine full-page brush & ink drawings of the abdomen, with annotations regarding palpation, symptoms (tenderness, pain, skin color, warmth or coldness, swelling, hardness, etc.). There are a number of references to the methods used by Yoshimasu and Suan Kagawa, a disciple of Konzan. In fine condition. Minor worming, carefully mended. (Inventory #: 7057)
$4,500.00 add to cart or Buy Direct from
Jonathan A. Hill, Bookseller
Share this item
Jonathan A. Hill, Bookseller, Inc.
Offered by