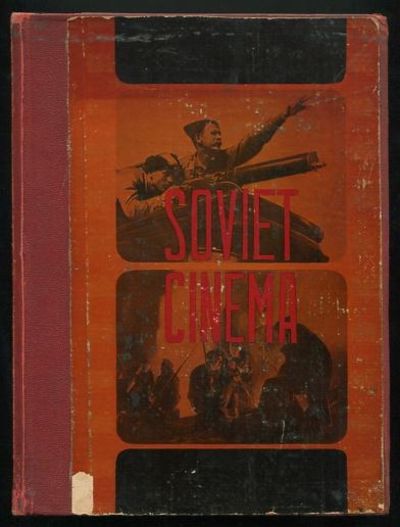 by Arossev, A., ed.
Moscow: Voks. Good. 1935. First Edition. Hardcover. (pictorial paste-on cover illustratoins; no dust jacket) [a well-worn ex-library copy, with remnants of removed labels on front pastedown and ffep, bumping and edgewear all around; also note that the celluloid silhouette of Stalin is missing from this copy]. (B&W photographs) The Soviets' own assessment (in English) of their national cinema during the Stalin era, profusely illustrated. Includes: numerous articles on the Soviet film industry and its importance in the life of the nation and its people, the high political and artistic qualities of the country's cinematic art, etc.; biographical notes on 19 individual filmmakers (including Alexander Dovzhenko, V.I. Pudovkin, Sergei Eisenstein, Dziga Vertov, Lev Kuleshov, Eduard Tisse); a section on the conception and production of the 1934 film CHAPAYEV, an epic film glorifying one of the heroes of the Revolution; statements "on Soviet film art" by 29 people, including many of the same filmmakers profiled in the biographical section, but also various foreigners such as Andre Gide, John Wexley, John Howard Lawson, and Cecil B. DeMille (wonder how the staunchly anti-communist DeMille felt about that, a few years later?). The last dozen or so pages contain ads from various Soviet producing firms, touting their recent product. NOTE, again, that the celluloid silhouette of Stalin is missing from this copy -- although the fold-out page with the cut-out window (through which Lenin can be seen) is fully intact, and the book is otherwise complete with no missing pages or textual markings. A serviceable copy of a fairly rare book. . (Inventory #: 25510)
$350.00 add to cart Available from ReadInk
Share this item
ReadInk
Offered by