A Year Before Sailing To America, Comte De Rochambeau Gives Military Orders About Patrols: “Place A Number Of Rather Strong Posts Able To Provide Patrols Covering The Various Exits…When Our Troops Are Accompanied By Cavalry Each One Of These Standstill Patrols Should Be Escorted By Two Hussars” 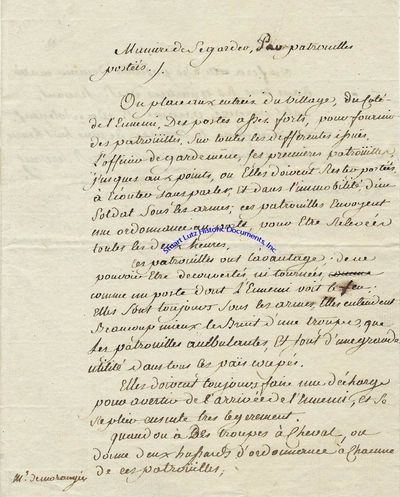 signed
by COMTE DE ROCHAMBEAU
COMTE DE ROCHAMBEAU (JEAN-BAPTISTE DONATIEN DE VIMEUR) (1725-1807). Rochambeau was a French nobleman and Commander of the French Army during the American Revolution. He arrived in Rhode Island in 1780 and, in 1781, he and Washington marched their combined forces to Yorktown to siege the British forces there. DS. 2pg. 6 ¼” x 8”. August 3, 1779. Paramé [France]. A document signed “Le Cte. de Rochambeau” in French. He issued orders to Baron de Morangies, the Comte de St. Alban, respecting patrols: “At the entrance of each village...place a number of rather strong posts able to provide patrols covering the various exits. The officer on watch will then guide some of these patrols to various points…these soldiers must stand still there fully armed...not move, not speak but listening constantly to be relieved every two hours. These small patrols have the advantage not to be easily detected compared to the larger posts which are often noticed and found out through campfires...such standing patrols can detect noises of advancing enemy troops better than the so-called moving patrols...in case the enemy advance it is required that such patrols fire while withdrawing slightly. When our troops are accompanied by cavalry each one of these standstill patrols should be escorted by two hussars...”. Rochambeau was on military duty in France, but within a year, he sailed for America where his performance was indispensable. He is the most underrated major figure of the American Revolution. The letter has dark ink, mailing folds and remnants of old tape on the address panel. (Inventory #: 4886)
$1,500.00 add to cart Available from
Stuart Lutz, Historic Documents, Inc.
Share this item