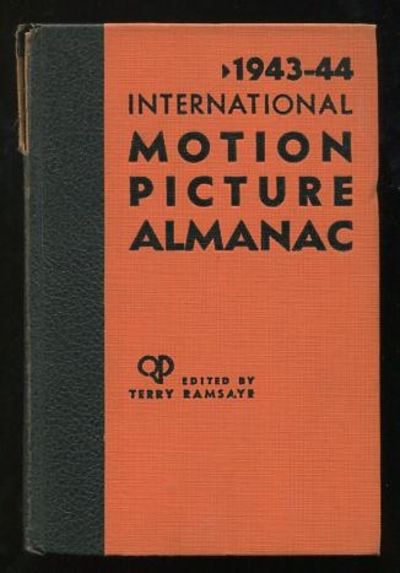 by Ramsaye, Terry, ed.
New York: Quigley Publishing Company. Good. (c.1943). (15th Annual). Hardcover. (no dust jacket, as issued) [good solid copy with firm binding (often not the case with these heavy volumes) and just light shelfwear, although unfortunately blemished by rips in spine covering at top front hinge (about 2") and top rear hinge (about 1")]. (B&W photographs, advertisements) Biographies, directories, statistics, surveys, etc., focusing primarily on the American film industry but justifying its "International" titling by including sections on the British and Latin American film markets. This was, of course, during the war, so the disruption to the formerly-lucrative European market was, shall we say, rather seriously disrupted; as publisher Martin Quigley puts it in his introductory note, the volume records "the status and affairs and people of this great industry as it functions amid the travails and disorders of war round the world," yet attesting that "there is working order and discipline in the motion picture, in both the art and the industry," and touting the book as "a document of achievement now and assurance for tomorrow." The sections of the book are: Who's Who (comprising about 60% of the volume's 1,034 pages); Motion Picture Corporations (including personnel and financial statements); Services; The Motion Picture in the War; Theatre Circuits; Organizations; Pictures (brief credits, release dates and running times for features, 1937-1943, with lists of short subjects and foreign film imports); Codes and Censorship (including the full text of the Motion Picture Production Code); British Film Market; Latin America; Theatre Equipment, Materials and Furnishings; Radio [and] Television; Consent Decree (including the full text); Industry Facts and Events of 1942-43; The Press. Interspersed throughout are advertisements for both companies and individuals. **** NOTE that additional shipping charges will be requested for international shipping of this heavy book, or for Priority Mail service to U.S. destinations. If this concerns you, please contact us for a shipping quote before placing your order. **** . (Inventory #: 25595)
$75.00 add to cart Available from ReadInk
Share this item
ReadInk
Offered by