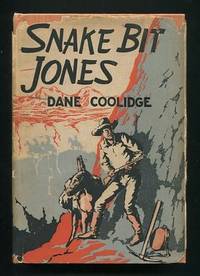 by Coolidge, Dane
New York: E.P. Dutton & Co.. Very Good+ in Fair dj. (c.1936). First Edition. Hardcover. [good solid book, with light wear mostly at the spine extremities; the jacket, however, is s bit on the tattered side, with paper loss at and adjacent to the top of the spine, at the base of the spine and at several corners, considerable age-browning (especially the spine), a long split along the front flap-fold, and various other depredations (it will, of course, be enclosed in a new mylar jacket protector, which will help it maintain whatever structural integrity it still has)]. Western adventure novel set largely in California's Death Valley, domain of the title character, a veteran prospector who's described in the jacket blurb as "easily one of Coolidge's most likeable characters: naive, and susceptible to feminine intrigue; courageous and cunning in his natural occupations of scouting, mining, fighting, and outwitting his relentless, ruthless prospecting enemies." The plot has to do with various people trying to outfox Snake Bit in order to discover the location of a hidden gold mine; the book has been somewhat misclassified (in my opinion) as a "Hollywood novel" due to its inclusion in Anthony Slide's critical bibliography of that genre, in which he describes the plot thus: "A Hollywood millionaire brings in some Hollywood beauties to seduce prospector Snake Bit Jones and find the location of his gold mine." This is, however, an inaccurate representation. Firstly, the millionaire is only a "Hollywood millionaire" because he happens to live in Hollywood -- he's actually a bank president whose avocation, it seems, is bankrolling prospectors; he's referred to a few times as the "Grubstake King," but there's no indication that he has any involvement in the movie business. Secondly, the two female characters aren't exactly seducers doing the millionaire's dirty work: one of them is his daughter, and the other is a motion picture stunt girl and aspiring actress with whom Snake Bit is smitten (and has a prior acquaintance). Most importantly, however, there is no filmmaking or studio activity depicted at all, only a couple of ill-defined and sketchily-described "publicity stunts" that involve Snake Bit riding a horse down Hollywood Boulevard and tossing chunks of gold to the public. (Apparently this has something to do with his stunt-girlfriend's ambitions to advance her career.) And, by the way, another source that's gotten this book wrong is Baird & Greenwood's bibliography of California fiction, which describes it as "a fictional projection of the character of Death Valley Scotty," which, sorry, it just isn't. (And as long as I'm ragging on this book, here's something else: throughout the book, the main character is alternately referred to as both "Snake Bit" and "Slim" (occasionally "Death Valley Slim"), sometimes by both names within the space of a single paragraph -- a very weird authorial choice that's never explained, but that the reader just has to adjust to.) Coolidge (1873-1940) wrote several dozen books with California and Southwest settings, both fiction and non-fiction, and was also known as a naturalist, photographer and poet. The title character, under his alternate "Death Valley Slim" moniker, featured in at least one of the author's earlier novels, "Lost Wagons" (1923); there may have been others. . (Inventory #: 25622)
$150.00 add to cart Available from ReadInk
Share this item
ReadInk
Offered by