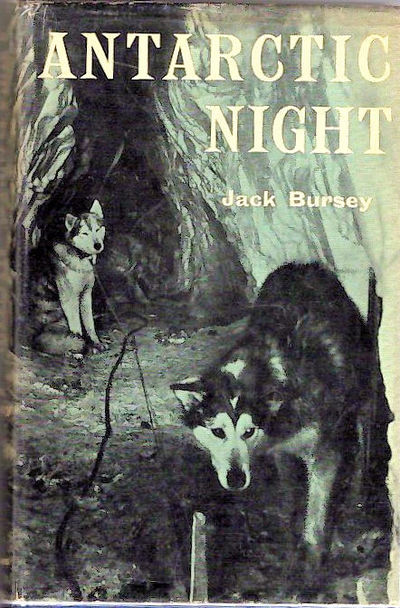 by Bursey, Jack
London: Longmans, Green and Co, 1958. First Edition. Near Fine/Very Good. [9x6in]; 256 pp., four plates with 10 images, one map; Blue cloth covers with gilt lettering on light blue label on spin, all edges trimmed; light green tinted pictorial dust jacket with white lettering on front and spine, image of dog kennel in the ice, advertisement on back; Minimal shelf wear to covers and edges, dusty age toned top edge, bookplate of Steve Fossett on front end paper; Minimal shelf wear to dust jacket, light soiling to covers and darken spine, minor rubbing along edges and corners. [Conrad p. 377]. Jack Bursey (1903-1980) was a polar explorer and US Coast Guard Commander. He was selected by Richard Byrd as a member the Little America expedition (1928-1930) to the Bay of Whales on the Ross Ice Shelf. During his career in the Coast Guard, he was also part of the Byrd U.S. Antarctic Expedition in 1939-41 and the massive Operation Deep Freeze in 1955-57. Operation Deep Freeze was the United States contribution to the International Geophysical Year projects that included several separate expeditions and the establishment of the Scott-Amundsen South Pole station. This book is Bursey's account of his adventures and sledging journeys.Steve Fossett (1944-2007) was a successful commodities trader and an adventurer that set world records in balloons, sailboats, gliders and unique powered aircraft. His 2,000 + book collection included significant and authoritative accounts of aeronautics, polar, Asia, Australasia, circumnavigation's, mountaineering and others. In 2007, Fossett disappeared on a solo flight in a light aircraft over the eastern Sierra Mountains along the California and Nevada border. The wreckage was found by hikers a year later along the rugged Mt. Ritter range in the Ansel Adams Wilderness in Madera County, about 10 miles east of Yosemite National Park. (Inventory #: 13660)
$46.00 add to cart Available from
David Spilman Fine Books
Share this item