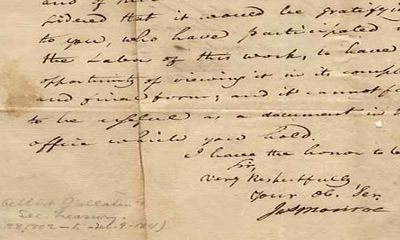 by James Monroe
27/12/1811. The first Census was conducted in 1790, and marshals of the U.S. judicial districts were responsible for the gathering of the Census data for each family in each district. A summary was then transmitted to the President through the Department of State. The second census was conducted in the same way.At that time, the U.S. had no formal means to measure the growth or decline of its manufacturing sectors, though these were an increasingly important part of its economy. An act of May 1, 1810 sought to address this problem by giving the federal government authority to collect more information on the size of the states’ economies. It required that marshals not only transmit to the Secretary of State the general population data, but also that they convey to the Secretary of the Treasury “an account of the several manufacturing establishments and manufactures within their several districts, territories, and divisions.” The results of the 1810 census, a combination of the information gathered by the Secretaries of State and Treasury, were published in a 180-page volume.Letter Signed, Department of State, December 27, 1811, to Albert Gallatin, Secretary of the Treasury. “Sir, I transmit to you herewith a printed copy of the Third Census of the Inhabitants of the United States and of their territories. I have considered it would be gratifying to you, who have participated in the Labors of this work, to have an opportunity of viewing it in its complete and final form; and it cannot fail to be useful as a document in the office which you hold.” Letters between cabinet members on essential business are quite uncommon. This is the first from Monroe to Gallatin that we have had. (Inventory #: 3250)
$6,000.00 add to cart Available from Raab Collection
Share this item