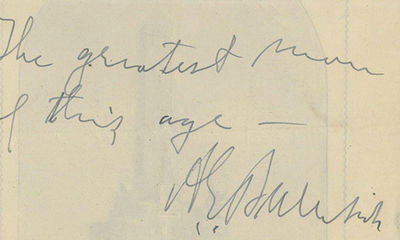 by Abraham Lincoln|Ambrose Burnside
11/05/1880. Ambrose Burnside instantly put down his business the moment he heard about Lincoln’s call for troops on April 17, 1861, and rallied to the colors. He had some good success early in the war in North Carolina, and was given command of the Army of the Potomac. He led the army to a disaster at Fredericksburg and was removed from the top post by President Lincoln, who nonetheless sought another command for Burnside. He was ultimately transferred to command the Department of Ohio in 1863 (where he arrested Clement Vallandigham and defended Knoxville). He was brought back to Virginia in 1864 where he pushed for the mining of Confederate lines which led to the unsuccessful Crater explosion which was meant to break the Confederate line at Petersburg 1864. The failure of the Crater plan, for which several other generals shared blame, led to Burnside’s removal from command. As historian Charles Bracelen Flood observed “The Battle of the Crater ended Ambrose Burnside’s military career.”Yet Burnside’s respect for the President who had removed him from command was not diminished.The Rev. Samuel Iraneus Prime, a Presbyterian minister who was editor of the New-York Observer, remembered: “During the war, I was dining with a party of which Gen. Burnside was one. A gentleman expressed surprise and regret that the war had not brought to the front in civil service some man of such commanding force of character, will-power and genius as to compel his countrymen to accept him as the born statesman for the hour. Gen. Burnside said: ‘We are drifting, and it is better so. I think Mr. Lincoln is just the man to keep the ship on its course. One more headstrong, willful and resolute might divide and weaken the counsels of the nation. We shall go through and come out all right.'”In the 1880s, O.H. Oldroyd prepared letterhead with Lincoln’s image on it and wrote to a handful of the men involved in the Civil War, asking their opinion on Lincoln’s legacy. Among them was Burnside.This letter, written on that Lincoln letterhead, belonged to Lincoln historian and collector Oliver Barrett, whose documents were sold in the middle of the 20th century. It has been in a private collection since that time.Autograph statement signed, Washington, May 11, 1880, calling Lincoln, “The greatest man of this age.” (Inventory #: 17404)
$4,000.00 add to cart Available from Raab Collection
Share this item