President William H. Taft Appoints George L. Meyer Secretary of the Navy In Meyer’s term, the Navy made its first experiments with aviation 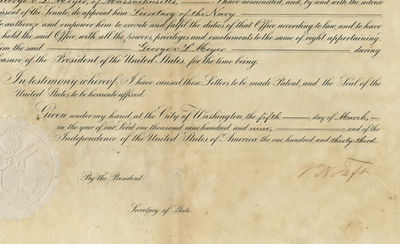 5/3/09. William Taft An uncommon Cabinet appointment, the first of Taft that we have hadOn March 4, 1909, William H. Taft was inaugurated the 27th President of the United States. Due to a blizzard the night before that covered Washington with 10 inches of snow, the inauguration was moved indoors into the Senate Chamber. After he took the oath of office, Taft participated in the inaugural parade. For the first time in inauguration history, the incoming First Lady (Helen Taft) joined her husband in leading the parade, which went from the Capitol to the White House. Then the Tafts attended the inaugural ball.The following day, March 5, Taft went to work at the Oval Office and appointed his Cabinet.George L. Meyer was a member of the Republican National Committeeman. Republican Presidents William McKinley and Theodore Roosevelt appointed Meyer to ambassadorships in Italy (1900–1905) and Russia (1905–1907). His patrician roots facilitated his interactions with the nobility of Europe, and Roosevelt often used him to deliver messages to Kaiser Wilhelm II. As ambassador to Russia, he presented Roosevelt's proposals for mediating the Russo-Japanese War directly to the Czar. Meyer served as Roosevelt's Postmaster General from 1907–1909, where he directed the introduction of the first stamp vending machines and first coil stamps. Taft appointed Meyer to the position of Secretary of the Navy, a post which Meyer held throughout Taft's term. During this period, the Navy made its first experiments with aviation.Document signed, large folio, Washington, March 5, 1909, Taft’s first day at work as President, appointing Meyer Secretary of the Navy. The Navy secretaryship was a Cabinet position until 1949.Appointments to presidential cabinets are quite uncommon, this being the first of Taft that we have had. (Inventory #: 16257)
$4,000.00 add to cart Available from Raab Collection
Share this item