President Woodrow Wilson Advocates Establishing the U.S. International Trade Commission, and Refuses to Hamstring It As the Price For Passage This commission was one of his enduring progressive measures to regulate and manage aspects of the economy, and followed his creation of the Federal Trade Commission 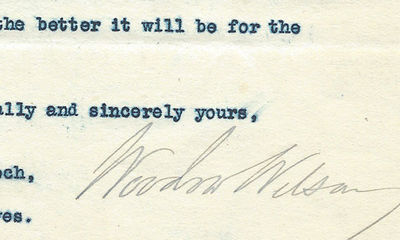 8/6/16. Woodrow Wilson “I think the freer it [the commission] is to get at the facts and to draw inferences as the facts demand, the better it will be for the whole country.”In the Progressive Era, many Americans supported the idea of non-partisan, semi-independent commissions to regulate and manage aspects of the economy. Theodore Roosevelt empowered the Interstate Commerce Commission and established the Food and Drug Administration. Woodrow Wilson created the Federal Trade Commission and the Federal Reserve system. He also guided establishment of the U.S. International Trade Commission, originally known as the U.S. Tariff Commission. All of these commissions continue to exist today, showing the wisdom and durability of the concepts.Here is how the latter commission came into being. In 1915 Democratic leaders urged the Administration to prepare for the 1916 election by crafting a proposal for a permanent tariff commission that would appeal to former Progressive Party voters who had supported TR in 1912. Wilson initially resisted, sticking to his anti-tariff political philosophy, but the specter of World War I began to influence his thinking. During December 1915 and January 1916, it became clear to Wilson and the Democratic leadership in the House that preparedness would require tax increases. Because of the power of populist Democrats, particularly Southern, the increases would almost certainly include hikes in the taxation of corporations, and the introduction of an excess profits tax. Wilson considered supporting this approach, but worried about the backlash both from business and from voters, particularly in the Northeast, who might punish the President for tax increases. So within the Wilson Administration, emanating from Cabinet members like Treasury Secretary of William G. McAdoo in particular, a new tactical idea took hold. The administration's support for the Tariff Commission idea could do more than simply appeal to Roosevelt Progressives; it could, by holding out the carrot of potential tariffs to assist them, help ease business hostility to the ambitious and radical income tax plans being put forward to raise money for war preparedness.Wilson overcame his hesitancy, and he and the House leadership reached a meeting of the minds. Wilson formally agreed that the Commission would focus on fact-gathering rather than policy-making, and its main assignment would be to assist legislators in writing trade laws. The question of what tariffs, if any, to raise would be left to the commission to recommend. They also agreed that Representative Henry Rainey of Illinois, the second-ranking Democrat on Ways and Means, would introduce the bill in the House. In June, once the Ways and Means Committee hammered out its version of the revenue legislation, Wilson and the House leadership decided the contents of the Rainey bill might be useful as a vehicle to dampen opposition to the tax/revenue legislation also being considered at the same time. That legislation raised the lowest income tax rate from 1% to 2% and increased the top rate to 15% on taxpayers with incomes above $2 million. There was also an excess profits tax, and the estate tax was introduced. So after private discussions with McAdoo, the Rainey Bill with the Tariff Commission proposal was included as one section of the Revenue Bill that the committee reported out.On June 6 Representative Roscoe McCullough, who was part of a strong faction in the House that wanted high tariffs to protect American industries, introduced a measure to supplement the Rainey Bill. The McCullough bill would create a commission, but required high tariffs to protect U.S. industry, thus taking that decision essentially out of the hands of the commission and codifying it into law. McCullough tried to influence Wilson to back his version, but the President declined.Typed letter signed, as President, on White House letterhead, June 8, 1916, to McCullough, letting McCullough down easy, but refusing to hamstring the proposed commission. “I am very interested in the talk we had the other day with the additions you propose to the Rainey Bill providing for the creation of a Tariff Commission, and you were so frank and interesting about the whole matter that I wanted to see the merits of your proposals. I am sorry to say, however, that I have not been able to change the opinions I expressed with you at the time. I think that the simpler the legislation in this matter is, the better it will be and the more effective, and that it would be best not to lay down lines to guide the Commission beforehand for fear we might lay down the wrong lines. I think the freer it is to get at the facts and to draw inferences as the facts demand, the better it will be for the whole country.”The tax bill, with the U.S. Tariff Commission provision, was passed and signed by Wilson on September 8, 1916. It established the Tariff Commission as an independent federal agency of the U.S. government to serve Congress and the President as an advisory, fact finding committee on tariffs, commercial policy, and trade matters. In 1974 the commission’s name was changed to the United States International Trade Commission, and today it not merely provides trade expertise to both the legislative and executive branches, but determines the impact of imports on U.S. industries, and directs actions against unfair trade practices, such as subsidies, dumping, and patent, trademark and copyright infringement. (Inventory #: 15993)
$3,000.00 add to cart Available from Raab Collection
Share this item