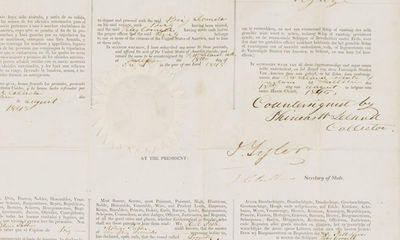 by John Tyler|John C. Calhoun
18/08/1845. The Brig Leonidas saw long service in the whaling industry, and is frequently mentioned in journals and records of the era. An interesting and unexpected episode in its history was recorded in a magazine in 1850: “Another illustration of the well known power and agility of the swordfish, the formidable enemy of the whale, was discovered by the workmen engaged in repairing the brig Leonidas, whaler, at this port, a day or two since. In searching for the cause of a leak which bad occurred during her last voyage, it was found that the side of the vessel bad been penetrated quite through, including the copper sheathing and two thicknesses of solid oak plank, not less than five inches, by the sword of one of these fish. The sword was about 12 inches in length…”Peleg Cornell was a well-known whaling captain out of Westport, Massachusetts [near New Bedford]. He made 20 voyages between 1831 and 1870, and left an interesting journal that sold at Christie’s. There is a whale weather vane atop his house in Westport to this day. He was the master of the Leonidas on more than one occasion.Document signed, as President, Washington, August 18, 1845, being a passport providing that “Leave and permission are hereby given to Peleg Cornell, master or commander of the Brig called Leonidas of the burthen of 127 tons, lying at present in the port of Fall River [near New Bedford, Massachusetts] bound for the South Atlantic Ocean and laden with Provisions, stores and utensils for a whaling voyage, to depart and proceed…on his said voyage…” The document is countersigned by John C. Calhoun as Secretary of State, a post he held for only one year; and also signing is Phineas W. Russell, Collector for the port of Fall River. The passport is in four languages (English, Spanish, French, and Dutch), as befits a ship’s traveling in international waters.It is an interesting fact that these ship’s passports were signed in blank by presidents and secretaries of state. They were then sent out to the various port collectors, who filled them out with specific ship information as each case arose. Occasionally some forms signed by one president remained on hand as his term ended, and the forms signed by the new president had not yet arrived or had run out. So some collectors chose to use the old, out of date forms, rather than be caught short. That very thing happened with this document, as you have Tyler and Calhoun signing a document dated in August 1845, yet their term had ended in March of that year. We have over our three decades had perhaps three or four of these seemingly misdated forms, which tell a story all their own. (Inventory #: 16495)
$4,000.00 add to cart Available from Raab Collection
Share this item