Former President Benjamin Harrison Struggles to Maintain His Family Relationships Intact, As His Son Russell Expresses Contempt For His Father’s Second Marriage “Notwithstanding the disrespect with which you continue to treat me and my household, I continue to have a solicitous intent on you and your family…” 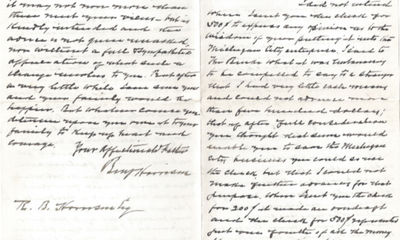 05/01/1898. Benjamin Harrison He also advises Russell on life and business: “Whatever course you determine upon, you owe it to your family to keep up heart and courage.” The former President says he has only $2000 cash and must work for a livingBenjamin Harrison was born in 1833 in North Bend, Ohio, to a prominent family that had a legacy of political activism. He was the great-grandson of a Signer of the Declaration of Independence, and grandson of the nation's 9th President, William Henry Harrison. Raised on a farm adjacent to his grandfather's vast estate, Harrison believed he was destined for greatness, and ended up following in his grandfather’s footprints as President.In 1853 Harrison married Caroline Lavinia Scott, and they moved to Indianapolis, Indiana, the following year. There he began his own law practice, and got involved in Republican politics. The Harrisons had a son Russell and a daughter Mary.During Benjamin Harrison’s presidency, Russell was his father’s aide and secretary, and Russell’s wife assisted the First Lady from the time Caroline became ill up to the time of her death in the White House in 1892. After the term ended, both the President and son Russell returned to Indiana, where the latter practiced law. Russell served in the Spanish-American War, and was responsible for overseeing the evacuation of Spanish troops from Cuba.On April 6, 1896, the former President married Mary Lord Dimmock, his first wife’s widowed niece and former secretary. She was 38 years old - 25 years younger than Harrison - and his two adult children, Russell, age 41, and Mary, age 38, did not attend the wedding as they considered the marriage of their father to their cousin inappropriate. This strained the relationship of father and son. Benjamin tried to reconcile Russell to the marriage, and to provide him with help and advice. Their letters from these years shed light on their continuing efforts to understand each other and maintain their family, but because their issues - relationships of fathers to sons, second marriages, family squabbles - are to an extent universal, they are also a moving study in love and estrangement in the human condition. They also, of course, remind us that even great men and women are just people, whose lives resemble our own.This remarkable letter and long letter demonstrates that some two years after his father’s remarriage, Russell was still freezing out his father and step-mother, while the father struggled to maintain the family relationships.Autograph letter signed, on his personal letterhead, Indianapolis, January 5, 1898, to Russell, questioning his son’s business judgment, refusing to invest in his schemes, and expressing hurt and pain at being ignored by him. ""I did not intend when I send you the check for $500 to express an opinion as to the wisdom of your putting it into the Michigan City enterprise. I said to Mr. Burke that it was embarrassing to be compelled to say to a stranger that I had very little cash means and could not advance more than five hundred dollars; that if after full consideration you thought that sum would enable you to save the Michigan City business you could so use the check but that I could not make further advances for that purpose. When I sent you the check for $200 it made an overdraft and the check for $500 represents just one fourth of all the money I had at that time. I have some money due me and am trying to earn some more but I do not know when I shall have it and I cannot make any further arrangements for the Michigan City Company.""You will remember that I have often said to you that I could not backup enterprises that needed large investments. But notwithstanding the disrespect with which you continue to treat me and my household, I continue to have a solicitous intent on you and your family, but I cannot back up doubtful enterprises or such as call for large sums of money. You ask my advice and I will not withhold that, though I have not studied the situation at Michigan City so carefully as to make its special application of much value. No man can safely undertake enterprises involving capital who has no capital and must depend upon loans or the sale of bonds to carry them through. A time is nearly sure to come when loans cannot be had and then there being no reserve failure ensues. It seems to me that your experience must confirm this view. The deduction is that a man without capital should keep out of such enterprises unless he can associate another man with him with needed capital. And you have neither the capital nor even any safe expectation of a loan to tide it over. It seems to me that a sale of the property is the only wise and safe course. If you can realize a profit well - but if not it would be great gain to get out without a failure and a receivership. You do not reside there and must for that reason also be at a disadvantage, and I do not see how you are to get any money out of it for your expenses. I think you should manfully face the situation and turn your enterprise and industry into some pursuit where your success would not be dependent on your ability to borrow money. The substance of this I have said before, and it may not now more than then move your views - but is kindly intended and the advice is not given unasked nor without a full and sympathetic appreciation of what such a change involves to you. But after a very little while I am sure you and your family would be happier. But whatever course you determine upon, you owe it to your family to keep up heart and courage.”This unpublished letter was acquired directly from the Harrison descendants and has never been offered for sale before. (Inventory #: 19579)
$6,000.00 add to cart Available from Raab Collection
Share this item