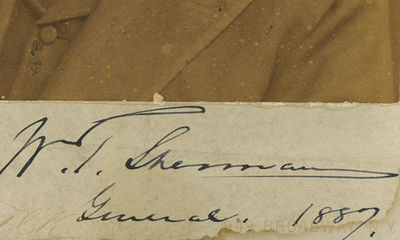 by William T. Sherman
15/11/1887. Gen. William T. Sherman was the most creative and intuitively brilliant of all the high-ranking Union generals of the Civil War. He was groundbreaking as well, as he used the practice of total warfare during his signature “March to the Sea” campaign to bring the war home to the heart of the South. Sherman’s employment of this technique exposed the weakness of the Confederacy, and also earned him the lasting enmity of Southerners. Nevertheless, he epitomized the characteristics of a master tactician, and because of his warfare tactics, the Civil War ended with a Union victory much sooner than it would otherwise have.Rose Eytinge was a Jewish American actress and author and rose to become one of the most popular female stars of the 1860s and 1870s. At 17, she embarked on her professional stage career, appearing in New York with such legendary performers Edwin Booth. She also toured Boston, Philadelphia, Baltimore, and Washington, where President Abraham Lincoln attended several of her performances and invited her to the White House. Eytinge’s acting career went into hiatus for several years beginning in 1869 when she married and left the country with her second husband, George H. Butler, U.S. consul general to Egypt.From 1869-1883, a group of 50 American military officers, veterans of the Union and Confederate armies, were dispatched to Egypt to help establish a national army and a military training program, based on the model of West Point. The “Americans on the Nile” project was launched by the enlightened Khedive of Egypt, the administrator for the Ottoman Empire and in 1872, General Sherman paid a visit to the Americans in Egypt. During this visit, he and Eytinge met for the first time.After his time abroad, Sherman returned home and lived the rest of his life in New York City. He was devoted to the theater and was much in demand as a colorful speaker at dinners and banquets, in which he indulged a fondness for quoting Shakespeare. Eytinge divorced her husband, and returned to New York City as well. She resumed her career with the Union Square Theatre Company. It was at this time that she played one of her most famous roles, Shakespeare's ""Cleopatra"" for which she drew on her Egyptian experiences. Sherman was a fan and admirer of her theatrical work during this time period.Benjamin Falk was a member of photography's ""old guard."" Credited as one of first photographers to embrace dry plates, he soon began carving his own professional niche as an accomplished society photographer and later a theatrical photographer. He opened his Broadway studio in 1881, which quickly became known for its stylish celebrity portraits.A beautiful signed and inscribed CDV of William T. Sherman in civilian clothing, by Benjamin Falk, New York City, Nov 15, 1887. Signed twice: on the front, ""W. T. Sherman, General 1887”; and on the verso a full inscription, ""To Mrs, Rose Eytinge, New York City - With best compliments of her friend and admirer. W. T. Sherman, General, New York City Nov 15, 1887."" (Inventory #: 17374)
$4,000.00 add to cart Available from Raab Collection
Share this item