Rudyard Kipling, Whose “Jungle Book” Formed the Early Inspiration for the Boy Scout Organization, Writes of His Interest in the Organization “I am of course greatly interested in the work of the Boy Scouts” 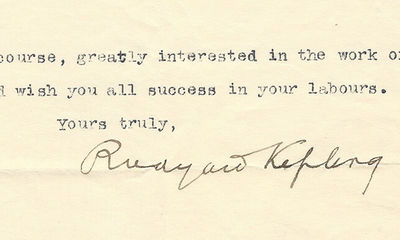 7/4/14. Rudyard Kipling The Scouting program has used themes from The Jungle Book by Rudyard Kipling since 1916.The Boy Scouts of America (BSA) was inspired by and modeled on the Boy Scout Association, established by Robert Baden-Powell in Britain in 1908. In the early 1900s, several youth organizations were active, and many became part of the BSA.In 1914 Baden-Powell announced a Junior Section for Scouting. In 1916, he published his own outlines for such a scheme, to be called Wolf Cubbing. Baden-Powell asked his friend Rudyard Kipling for the use of his Jungle Book history and universe as a motivational frame in cub scouting. Baden-Powell wrote a new book, The Wolf Cub's Handbook, for junior members. In 1917; junior members became known as Wolf Cubs.  The Cubbing program used elements of the Jungle Book series, with the Cubmaster taking the role of Akela and the assistant Cubmaster the role of Baloo.Typed letter signed, April 7, 1914, to Philadelphia Boy Scout leader Charles Hart.  “I am much obliged for your kind letter and can only express my regret that I am afraid that, owing to press of work, I cannot see my way to meeting your request for a scouts song.  I am of course greatly interested in the work of the Boy Scouts and wish you all success in your labors. (Inventory #: 14179)
$1,500.00 add to cart Available from Raab Collection
Share this item