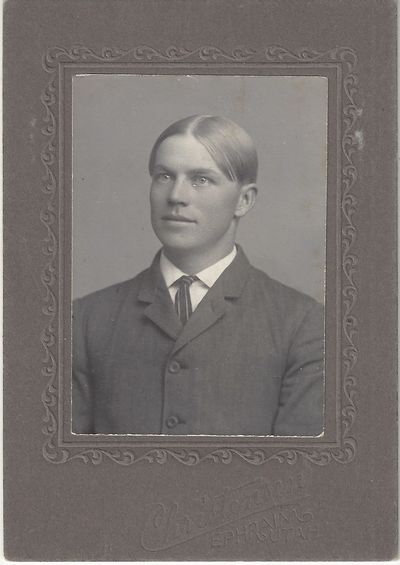 by Christensen, J. P.
Ephraim, UT: Christensen, 1905. Carte de Visite. Silver gelatin photograph [7 cm x 5 cm] on a gray Christensen mount [11 cm x 7.5 cm] Manuscript identification on the reverse. Nice condition. "Thomas C. Christensen, 74 farmer and stockraiser of Chester, died here Sunday, February 21st at eight o'clock at the home of his son James. Mr. Christensen had been in poor health for the past two years. February 14th he suffered a stroke and passed away one week later. He was born at Lendon, Hjoring, Denmark, April 18, 1863, the son of Berthil and Joanna Thompson Christensen. After joining the L.D.S. Church in 1882 he emigrated to America and made his home in Spring City for a number of years later moving to Chester where he has since resided. He served for twenty-three years in the Bishopric and was president of the Chester Irrigation Company for fifteen years." - Mt. Pleasant Pyramid (1937-02-26)

John Williams Gunnison (1812-1853) The Last of the Western Explorers: A History of the Survey through Colorado and Utah with a Biography and Details of His Massacre

Denver : Artcraft Press , 1955
(click for more details about John Williams Gunnison (1812-1853) The Last of the Western Explorers: A History of the Survey through Colorado and Utah with a Biography and Details of His Massacre)

Moscow : University of Idaho Press , 1994
(click for more details about History of Idaho)
View all from this seller>