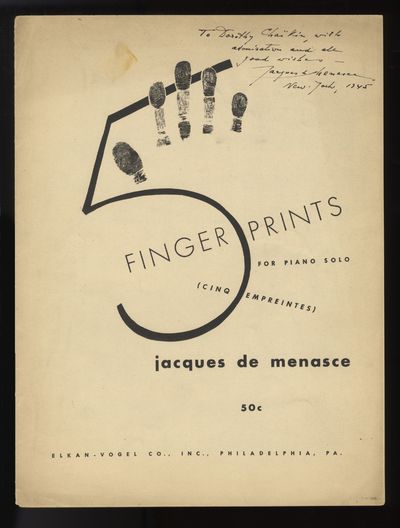 With autograph inscription signed by the composer to outer corner of upper wrapper: "To Dorothy Chaïkin, with admiration and all good wishes" dated New York, 1945.

Austrian composer and pianist Jacques de Menasce was a pupil of Berg in Vienna but did not adopt a style of twelve-tone composition. He toured as a pianist and worked primarily in the United States after the outbreak of war.

"His music is not easy to classify: structurally it bears some relation to impressionism, while its somberness and its vivid, crisp chromaticism recall late Bartók." Peggy Glanville-Hicks in Grove Music Online

Dorothy Chaïkin (née Daubel) was an American pianist active in New York at the same time as Menasce. Her husband Nathan Chaïkin was a Swiss cellist and a noted art collector. (Inventory #: 34286)
$39.00 add to cart or Buy Direct from
J. & J. Lubrano Music Antiquarians
Share this item