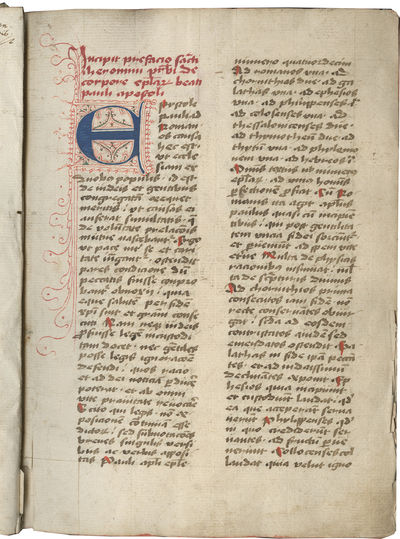 by Nicholas of Lyra
MANUSCRIPT COMBINING A LATIN NEW TESTAMENT AND COMMENTARIES BY NICHOLAS OF LYRA. In Latin, decorated manuscript on paper, Northeastern Netherlands or Northwestern Germany, c. 1450-1475. Dimensions 275 x 198 mm., 383 folios, apparently complete, written in a formal cursive gothic bookhand without loops in two columns of 38 lines, red initials, nine- to fifteen-line blue or parted red and blue initials, added running titles, which continue to part two of the volume; ff. 146-end, copied in a very neat controlled hybrida script, red initials 3- to-10 line (occasionally blue), a few with pen decoration,10-line red initial, six 10-line parted red and blue initials. BINDING: seventeenth century(?) plain vellum over pasteboard with yap edges. TEXT: This sizeable volume combines a copy of the New Testament, lacking only the Gospels, with the Commentaries by Nicholas of Lyra on the same books of the New Testament. Although possibly of independent origin, these two sections are contemporary and were united very soon after they were copied. This is the only manuscript we know of that combines the two within one volume, but it is easy to see how readers benefited greatly by having these complementary texts together. PROVENANCE: Evidence of the script, decoration, and watermarks suggests the first part of the manuscript, with the biblical text, was copied in Northwestern Germany, c. 1450-1475; evidence of the watermarks and script suggest the second half of the manuscript with Nicholas of Lyra's postillae likely copied in the Northeastern Netherlands or in Northwestern Germany, c. 1460-1470; belonged to Johann Heinrich Joseph Niesert (1766-1841); later owners, Isaac H. Hall and S. B. Pratt. CONDITION: In very good overall condition, f. 1 slit at the bottom inner margin, frayed in the outer margin, ff. 145v-146 paper noticeably darkened, f. 383 frayed at the gutter, few worm holes, rare stains from damp top margin in the second half, last few pages a bit fragile in the inner margin, vellum at the front now detached from the pasteboard and curling up, front and back covers rather dirty and scuffed. Full description and images available. (TM 1089) (Inventory #: TM 1089)
$70,000.00 add to cart Available from
Les Enluminures, Ltd.
Share this item
Les Enluminures, Ltd.
Offered by

Album Amicorum of Johann Heinrich Hahn from Heidelberg; in German, with single entries in French and English, illustrated manuscript on paper

The Mirror of the Rebuke of the Soul to the Body; Sermons for Lent; On the Sibyls; The twelve prophetesses for the Lord; and other texts; in Latin, manuscript on paper

by MATTHEUS RIPANENSEM; ST. JAMES OF THE MARCHES

Italy (Naples), 1467-1469
(click for more details about The Mirror of the Rebuke of the Soul to the Body; Sermons for Lent; On the Sibyls; The twelve prophetesses for the Lord; and other texts; in Latin, manuscript on paper)
View all from this seller>