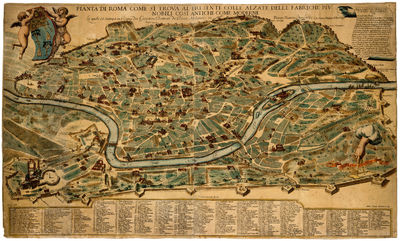 by CRUYL, Lievin / TESTONE, Giulio (engraver).
Copperplate etching/engraving printed on two joined sheets of heavy paper [83 x 50.5 cm]; some old repairs on verso and evidence of folds indicating that it was probably used as a folding/pocket map. Trimmed close occasionally slightly beyond its rectilinear printed border, some edges a little worn. Altogether, attractive and genuine.
Very rare separately published first edition of this 1665 iconographic plan of Rome, in full contemporary handcolor, designed by the Ghent architect, draftsman, and etcher Lievin Cruyl (1634-c. 1720). Famous for his remarkably executed vedute of Rome, drawn with the aide of optical instruments to spectacular effect, and the present plan, Cruyl was the principle rival of Giovanni Battista Falda in the competition for market share of Rome's graphic representation in print during the 1660's. When Cruyl's Pianta appeared in 1665, displaying many of the city's monuments in a fresh icon-centric way, it was one of the most up-to-date plans of the Baroque period to show the city's current architectural transformation under Alexander VII., including Bernini's recently completed colonnade for St. Peters.
The Pianta di Roma, drawn on an orthographic projection from a lofty aerial perspective, was engraved after Cruyl's design by the otherwise unknown Roman artisan Giulio Testone. Although its title offers the viewer "elevations of both the best ancient and modern buildings," its focus is squarely on the new Baroque architecture of Rome, with three-dimensional depictions of the recently completed Piazza di S. Pietro, Piazza di S. Maria del Popolo, Piazza Navona, Il Gesù, and the Propaganda Fide emphasized over the city's ancient ruins. At the upper left of the plan putti bear Pope Alexander VII's arms, while at the lower right Cruyl's motto – Labore et Constantia – appears under the emblem of a hand with a compass emerging from a cloud. This motif derives from the Euclid/Archimedes/Bramante figure in Raphael's School of Athens (1509-11), but perhaps also more closer to home, from his countryman Christopher Plantin, who used it as a sign for the Plantin Press. Along the lower edge is an extensive key locating some 340 important structures, and by selectively giving visual prominence to the most notable among them, Cruyl's plan could easily have been the quintessential tourist map for the city of its time. Simple to locate places to visit at a glance; and, like the copy at hand which is printed on heavy paper and showing pocket-size folds from an earlier time (of 23.5 x 22.5 cms.), it could be portable. It was also available from its publishers on Piazza Navona, a central spot. Many tourists, especially French, visited Rome in the 1660's; and for two years Cruyl's plan had no rivals, until the publication of Falda's piccolo pianta (small plan) in 1667. Nonetheless, it was republished twice more over a span of more than 100 years and received a French edition in Paris in 1668, giving testimony of its continuous utility.
The Pianta di Roma has received considerable attention from modern scholars for its centrality to the decade-long rivalry between the mapmakers Lievin Cruyl and Giovanni Battista Falda (1648-78) concerning the popular depiction of the Eternal City – then undergoing a transformation led by two other artistic rivals, the Baroque masters Gian Lorenzo Bernini (1598-1680) and Francesco Borromini (1599-1667) – and is a key document in the cartographic "contest between two branches of the De Rossi publishing empire [the cousins Giovanni Giacomo and Giovanni Battista] to produce the finest map of Rome" (McPhee, p. 235 and note 16). Recent scholarship, while recognizing the ultimately winning qualities of Falda's 2nd map, the famous 1676 12-sheet large scale plan of Rome, has tended to favor the "idiosyncratic and personal" qualities of the Flemish artist, casting "Falda as the well-patronized executant of De Rossi's corporate vision, while Cruyl plays the part of the unrecognized genius" (McPhee, p. 235-6). Joseph Connors neatly summarizes this paragone between the two printmakers this way: "We cannot study the maps of Cruyl and Falda apart from the larger context of the rivalry between their publishers, a rivalry that continued long after the departure of Cruyl from Rome in 1675 and the death of Falda in 1678. Falda's abundant, charming, and simplifying vision has won the hearts of all lovers of Rome, thanks to his benevolent publisher, Giovanni Giacomo De Rossi. But notwithstanding his exploitative publisher, Cruyl had the eye of the lynx, and he showed Romans and northerners alike that science, optics, and virtuoso perspective could help the artist create images of haunting beauty" (Connors, "Rivalry," p. 230).
Cruyl "was born in Ghent in 1634 and is last mentioned in the documents there in 1662. He was ordained a priest in 1658. His Italian sojourn seems to date from about 1662 to about 1676…. After Rome, he had a career as an architect in Ghent and as a view artist in Marly, Versailles, Chantilly, and Paris. He is not documented after the 1690's, though his supposed date of death is 1720 or 1722" (see Conors, "Rivalry").
A re-worked 2nd edition of the Pianta di Roma appeared in 1696, and a third in 1773. Hubert Jaillot published a French edition at Paris, with additions, in 1668. They are rare, the first moreso.
OCLC and KVK identify only two copies of this 1665 Pianta di Roma, those housed at the British Library and the Herzogin Anna Amalia Bibliothek, Weimar.*Hülsen, "Saggio," p. 87, no. 110; Frutaz, Le piante di Roma, vol. 1., pp. 216-7, no. 154; Gori Sassoli, Roma Veduta, p. 175, no. 31; C. Marigliani, Le Piante di Roma delle collezioni private, no. 124; Barbara Jatta, "La pianta di Roma di Lievin Cruyl del 1665," in Bevilacqua and Fagiolo, Piante di Roma dal Rinascimento ai catasti, pp. 212-17; Joseph Connors, "Giovanni Battista Falda and Lievin Cruyl: Rivalry between Printmakers and Publishers in the Mapping of Rome," in Piante di Roma dal Rinascimento ai catasti, pp. 219-31; Connors, "Cruyl contro Falda," in Vedute Romane di Lievin Cruyl: Paesaggio urbano sotto Alessandro VII, Jatta and Connors, eds., (Rome: American Academy, 1989), pp. 212-17; Sarah McPhee, "Rome 1676: Falda's View," in Piante di Roma dal Rinascimento ai catasti, pp. 232-43. Roma Veduta Disegni e stampe panoramiche della citta dal XV al XIX secolo, 31. (Inventory #: 6037)
$9,850.00 add to cart Available from Martayan Lan
Share this item
Martayan Lan, Inc.
Offered by