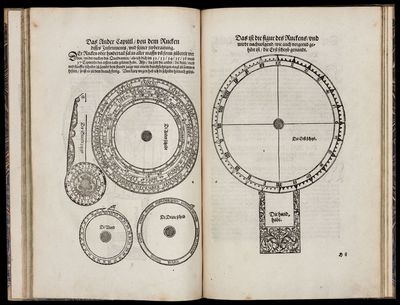 
First edition of this profusely illustrated technological classic on the use of a quadrant and related instruments by Petrus Apianus (1492-1552), "a pioneer in astronomical and geographical instrumentation, and one of the most successful popularizers of these subjects during the 16th century" (DSB). The Instrument Buch is among the earliest technical works in a vernacular language and one of the most influential.
Geared entirely to artisans and engineers, the work describes a series of over forty instruments, most related to the basic quadrant, and some of Apianus' own invention. In addition to its practical example, the work contains an important programmatic statement for making technical works available in the vernacular (A1 v., lines 1-4) and inspired many further works in German by such contemporaries as Stoeffler and Schöner. For their number and precision, the woodcuts aided greatly in the popularization of these instruments, and foreshadow a type of technical publication in which illustration becomes more important than text in conveying basic information.
The work is a "reassembled translation of earlier Latin pamphlets such as Quadrans Apiani (1532) and Horoscopion (early 1533) … Peter Apian, a mathematics professor at the University of Ingolstadt and a decorated favorite of Emperor Charles V, produced groundbreaking and relatively inexpensive teaching texts on astronomy, cosmography, and instruments for timekeeping throughout his long career. Apian collaborated with artists including Hans Brosamer and Michael Ostendorfer on woodcut illustrations and instruments for these student manuals … The Instrument Buch's title summarizes the book's contents at length, while the title woodcut, likely by Brosamer, does so more succinctly. The five scholars in the image demonstrate eight instruments, which the book subsequently explains how to use" (S. Karr Schmidt, p. 304).
Very rarely the Instrument Buch is found with an insert of printed instrument parts, but "Most of the surviving Instrument Buch copies are missing these inserts, probably because they were constructed according to the author's instructions … Apian explicitly instructs that these sheets 'which have all been printed on one side, should not be bound into or with the book, but [they] are the instruments[s] of which I have often made mention in the book that should be glued onto wood'" (S. Karr Schmidt, p. 304)
The present example is the rarer issue, with the letterpress text of the title printed in black only, without the place (Ingolstadt) and date (1533) printed below the woodcut on the title page, and before the addition of letterpress text surrounding the woodcut arms on the verso of the title page.
* Ortroy 104; Zinner 1514 (no collation); Barchas 64; Stillwell, Science 812; Wellcome 341; G. Kish in DSB I.178-9; modern facsimile with introduction, ed. Jürgen Hamel (1990); S. Karr Schmidt, "Peter Apian," in Prints and the Pursuit of Knowledge in Early Modern Europe, S. Dackerman ed., pp. 305-5, no. 72; I. Ernst, "Peter Apian und die Schwarze Kunst in Ingolstadt," in K. Röttel, Peter Apian: Astronomie, Kosmographie und Mathematik am Beginn der Neuzeit. (Inventory #: 5905)
$8,850.00 add to cart Available from Martayan Lan
Share this item
Martayan Lan, Inc.
Offered by