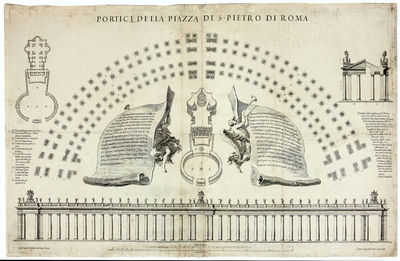 by [BERNINI] BONACINA, Giovanni Battista (c. 1620-64).
Copper engraving 53.7 x 83.5 cms. Composed of 2 sheets each with identical watermarks of an anchor with the initials "L" "M" within a circle surmounted by a star. Several horizontal & vertical creases where folded; minor restoration in blank areas of image and discoloration along old folds; faint staining at lower margin and light soiling here and there; short tear in lower margin..Faint contemporary annotations (measurements) within image & extended commentary on verso in French. Withal, still a very attractive engraving in generally good condition.

This grand engraving in 2 folio sheets joined, reproducing Bernini's design for the Vatican colonnade is its first official representation in print. Though the colonnade's construction was in its very early stages when it was printed in 1659, the present publication was Pope Alexander VII's formal announcement to the international community of its creation and an open invitation to those who will come to the Vatican to see and "experience"it firsthand. More than a mere piece of Vatican propaganda, however, Bonacina's print had great authority as an architectural plan. It is nearly identical to the preparatory design for the project drawn by Bernini and completed by his workshop which bears Pope Alexander VII's authorization for it to be engraved ("incidatur"). Importantly, it also includes considerably more detail than the schematic Vatican design which preceded it. For an understanding of Bernini's conceptualization of this grand architectural enterprise, it has long been considered a primary source of study on the subject.
According to Alexander VII's diary, as reported by the scholar Daniela del Pesco, on August 30, M. Nerli, (the printer?) visited the Vatican at 9:00 pm bringing with him about 20 copies of Bonacina's engraving: "30 agosto, Sabb[at]o, a 21 e da noi M. Nerli, si tirano circa 20 rami del disegno de' Portici di S. Pietro." While there is very little documentation of its eventual distribution, it is evident from its text that, despite its large size and the fact that the project itself was far from complete at the time, the idea was to present it to the "many people from countries far away [who] desire to see this design of great renown." The example at hand, with its evidence of having been folded down to a small rectangle (28 x 21 cms. aprrox.), indicating that it may have gone through the "mail," and its erudite commentary in French could plausibly suggest just such a scenario. On the verso of this example is a fascinating contemporary critique of Bernini's design in French, which is highly technical in nature and, perhaps, may have been written by an architect or an erudite with architectural training . It is unclear if the author of the critique is basing his remarks on the study of the print alone or the experience of seeing the finished colonnade in situ at the Vatican several years after Bonacina's publication. As the intention of publishing this print was both to reproduce with meticulous exactitude the project and to disseminate its design to a wider international audience, these two scenarios would not be mutually exclusive.
"In July 1656, Pope Alexander VII announced his intention to develop the square in front of St. Peter's. Bernini immediately began devising plans to open up the piazza, beginning with a trapezoidal space, transforming to a square and ultimately an oval plan…. On this print the plan at the upper left and the view in the centre show Bernini's design for two symmetrical colonnades, the uniformity of which is broken in the middle and at the ends by additional columns that project forward of the main line… In the upper right are a half-section and half-elevation of the end of the north colonnade. Running along the bottom is the elevation of the whole colonnade with statues along the top, as were later installed.
"Bonacina's print showed for the first time the scope of the colonnades and was published to promote the project to a wide audience… Bonacina was paid for the engraving in July 1659 and it was in circulation by September that year, when construction of the north colonnade was under way… The print was based on a drawing by Bernini and his workshop now in London (BM, P&D Oo,3-5)…" – Mark McDonald, 2047.
The text on the scrolls held by the trumpeting angels positioned in the center of the plan is in both Latin (on the left) and Italian (on the right) and translates into English as follows: "Knowing that many popes had experienced great inconvenience when visiting the church of Saint Peter's and other rooms in the Papal Palace, during the summer when the square is dominated by the sun, and in the winter when the rain makes it impractical, our current Holy Lord, pope Alexander VII, had it in mind to construct a portico which would remedy these inconveniences, also for the good public of the public as well as to raise the magnificence of the Temple and emphasize its façade. He initiated the construction of this portico with three walkways, separated by the four orders of the columns, for greater convenience to both carriages and people on foot. And because many people from countries far away desire to see this design of great renown, it was considered a good idea to satisfy their curiosity and send it to be printed."
*McDonald, Mark: The Print Collection of Cassiano Dal Pozzo, Vol. One, no. 2047; Kitao, T.K: Circle and Oval in the Square of Saint Peter's, Bernini's Art of Planning, New York, 1974. See D. del Pesco in Angelini et al in Alessandro VII Chigi (1599-1667): il Papa senese di Roma moderna…. Siena, 2000, pp. 289-91. (Inventory #: 6032)
$18,500.00 add to cart Available from Martayan Lan
Share this item
Martayan Lan, Inc.
Offered by