Addresses after a Dinner tendered to Edward Dean Adams On the Occasion of his seventy-ninth birthday, in the private dining salon of the Waldorf - Astoria Hotel, April ninth, nineteen twenty - five 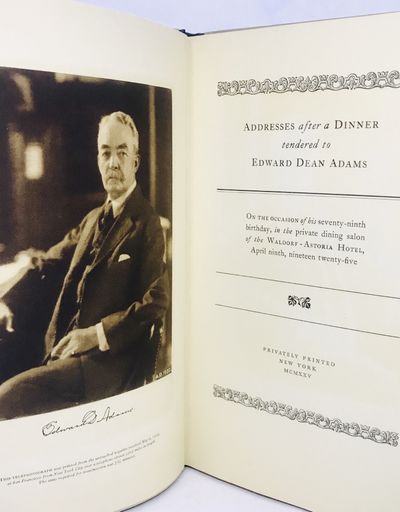 Privately Printed, 1925. Hardcover. Cream boards with paper title. Fine, in good glassine wraps and good cardboard box. 76 pages. Frontispiece Telephotograph with tissue guard. "On the occasion of his seventy-ninth birthday, the friends of Mr. Edward Dean Adams, comprising men in the fields of engineering, science, art, literature, transpiration, finance, industry and club life, asked him to be their guest at a testimonial dinner."

This transcript of the after-dinner proceedings highlights captains of industry at the end of the Second Industrial Revolution. Edward Dean Adams, a New York City banker, formed the International Niagara Commission and approached Nikola Tesla - at the time working for Westinghouse - to develop a plan to harness the Niagara Falls for energy. Tesla's success transformed the world, and became the model for power stations that were constructed in the United States.