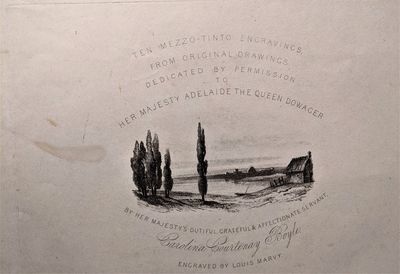 by Carolina Courtenay Boyle
Oblong folio.  Leaf size, 435 c 300 mm., [17 x 12 inches]; Plate size, 250 x 160 mm., [9 ¾ x 6 ¼ inches].  Ten soft ground etchings and aquatints; some minor foxing to the margins.  With the original printed wrappers, title printed around an engraving of a bucolic setting with cypress trees, a lake, cottage and sailboat.  The wrapper has some expert paper repairs to corners and fold at the spine,
Rare series of engraved plates by a British female artist and a French etcher of considerable reputation.
The plates were printed to celebrate the visit of Her Majesty Queen Dowager Adelaide (1792-1849) to the Island of Madeira off the coast of Portugal in 1846.  The images were from original drawings by Carolina Courtenay Boyle (1803-1883), a noted painter and draughtswoman, who accompanied Adelaide on her final tour before her death in 1849 and made sketches of the scenes through which they passed.  Courtenay Boyle was the 'maid of honour' to Queen Adelaide and loyal traveling companion.  In a short description of Ms. Boyle, Augustus Hare writes in his autobiography that Miss Boyle was a longtime companion of Queen Adelaide and a favorite of her husband King William IV.  He writes, "Miss Boyle herself was a more beautiful picture than any of those on her walls - still wonderfully striking in appearance, with delicately chiselled features, and an unrivalled complexion, while her golden-grey hair brushed back and cut short like a boy's (owing to a coup de soleil long before),added a marvelous picturesqueness."
The drawings by Courtenay Boyle capture the vistas and landscape panoramas the Island of Madeira and in eight of the ten images she incorporates two female travelers as part of the composition.  Mountains, bridges, inland seas, marshes, and pastoral scenes are delicately rendered and exquisitely etched, and the condition of the prints are such that each one retains much of their original luster and verve.
Louis Marvy, sometimes referred to as Maruy, was a member of the Barbizon School whose skill at soft ground etching was comparable to the work of Paul Huet and Charles François. Daubigny.  He was frequently published in the L'Artiste, Revue de l'Art Contemporain, the major 19th century journal of French and European art from 1831 - 1904.  Marvy moved to London from Paris in 1848 to escape the upheaval in Paris that year.
As title on the wrappers suggests, this was a memento given to Adelaide by her "dutiful, grateful, & affectionate servant."
This rare suite of prints does not appear to be in any American library of museum.  There is a copy in the British Museum Department of Prints and at the Bibliothèque Nationale de France.
Henri Beraldi, Les Graveurs du XIXe Siecle, p. 42. Not cited in Léopold Carteret, Trésor de Bibliophile du Romantique et Moderne 1801-1875.  Arntzen & Rainwater, Guide to the Literature of Art History, Q 89.  Augustus J. C. Hare, The Story of My Life.  Vol I, 1896, p. 292.. (Inventory #: 850)
$2,751.38 add to cart Available from
De Simone Company
Share this item
De Simone Company, Booksellers
Offered by