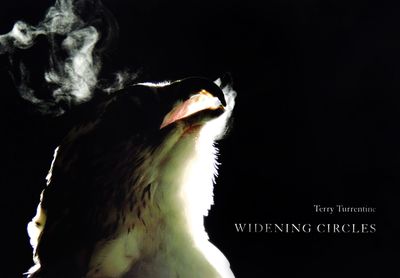 by Turrentine, Terry, photographer and book artist; Rainer Maria Rilke, poet; translated by Anita Barrows and Joanna Macy
San Francisco: Terry Turrentine, 2020. One of ten copies, signed by the photographer and book artist Terry Turrentine Two copies are artist's proofs and one is a handling copy. Although she grew up in a family whose traditions included guns and hunting, as an adult Terry became an esteemed artist and wildlife photographer, specializing in capturing spectacular photographic images of birds. Her previous artist's books were of snowy owls, egrets, and gannets. This latest work offers magnificent images of falcons and a message of hope at this challenging time in our history. She writes in her colophon: " Widening Circles celebrates the ferocious beauty of the falcon, and the interdependent relationship of all beings to each other. Some may see the portraits of falcons in their protective hoods as disturbing. But those familiar with the ancient art of falconry know the hoods are a means to protect the bird from the assault of outside stimuli, as they are extremely sensitive to light, sounds, color, and motion. This is why falcons are such fearsome predators. All predators and their prey maintain the balance of nature and are essential for the world as we know it to exist. It is the natural order of things that there is destruction and rebirth in every second of every day. The ultimate predator, mankind, however, often abuses the privilege of living off the resources of this planet, and upsets the natural balance, causing extreme destruction. As a result, we are witnessing a death spiral of the climate, of the social order, and of the basic balance we need to survive as a species." Terry says of the Rilke poem, "Widening Circles," printed in the book in both English and German: "Over 100 years ago, this was also the observation of Rilke, as he saw the degradation of some of the cities he visited. He could only find solace in God and the wonder of nature - and he dedicated his timeless love poems to both." She concludes: "Life, death, and renewal - each stage is fluid. I believe the sublime gift of living is its constant change, its eternal cycles, and our capacity for transcending destruction through creativity." The credits for this beautiful production: Photographs and creative direction by Terry Turrentine; Book and text design by Dana F. Smith; Editorial consulting by Susan Gangel; Typography and letterpress printing by Dina Pollack; Bound by John DeMerritt Bookbinding; Images printed at Electric Works by Noah and Kris Lang. The stunning images are printed in brilliant colors against a black background, with a line from the poem appearing on each page out of the dark background. The work is housed in a custom black cloth box with a red leather cover. Measures 10.5 x 14.5 x 1.5 inches. In fine condition. ARTISTB/052621. (Inventory #: 35163)
$5,000.00 add to cart or Buy Direct from
Kelmscott Bookshop
Share this item