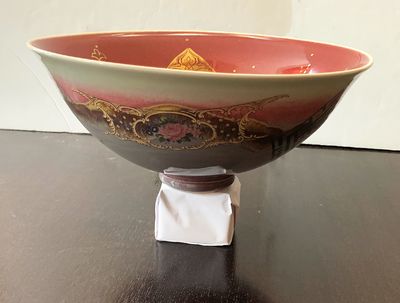 by OVISSI, Nasser (1934-).
Washington:: [Ovissi Gallery], 1990., 1990. 295 x 120mm. SIGNED on the bottom. Ovissi has received numerous awards and honors, including being exhibited at the 1959 Paris Biennial and a Grand Prize at the 1962 Biennale of Fine Arts of Tehran. "Nasser Ovissi is among the most famous Iranian artists whose renown has gone beyond the borders his birthplace. He is recognized as a great painter with a distinct style in the artistic circles throughout the world. / In his works that at the first glance project simplicity, he is always inspired by the Iranian cultural symbols and traditions, but he smartly demonstrates those symbols and traditions by applying a modernistic style to them which is particular to himself, to the extent that his style is easily recognizable even if his signature doesn't appear at the bottom of a painting." – Massoud Ovissi. / Art critic Javad Mojabi called Iranian expressionist artist Nasser Ovissi the painter of poetry during the opening speech of his one-day exhibit at the Tehran Museum of Contemporary Art (TMCA). Extra Postage will be required. (Inventory #: MEE1128)
$1,800.00 add to cart Available from
Jeff Weber Rare Books
Share this item