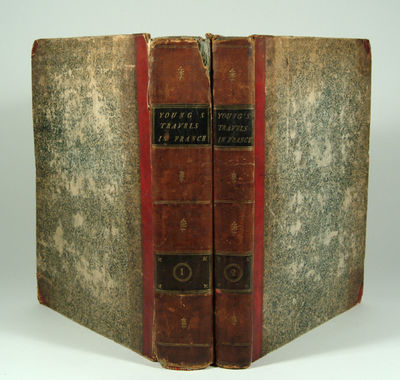 by YOUNG, Arthur
1792. YOUNG, Arthur. TRAVELS DURING THE YEARS 1787, 1788, AND 1789. Undertaken more particularly with a View of ascertaining the Cultivation, Wealth, Resources, and national Prosperity, of the Kingdom of France. Bury St. Edmunds, printed by J. Rackham for W. Richardson, London, 1792, 1794. Quarto. Two volumes. viii, 566[4]pp. + 3 folding maps (one hand-colored). [iv] 336 {4]pp. First edition of Volume I; first edition of Volume II, but published as the second volume of the second edition. Considered the greatest English writer on agriculture, Young previously published accounts of tours through Southern England and Wales, Eastern England, Northern England, and Ireland, as well as a great deal on agriculture and political economy. He found France to be both more fertile and worse farmed than England, and thought the Revolution might correct that. In early quarter morocco and marbled boards. Third (hand-colored) map detached, and some light pencil marks, otherwise internally fine. Wear to extremities, hinges split externally, and small loss to spine of Volume I. Bookplates of the mathematician Henry Wilbraham, and Henry Cabot Lodge. (Inventory #: 83074)
$1,500.00 add to cart Available from
Boston Book Company
Share this item