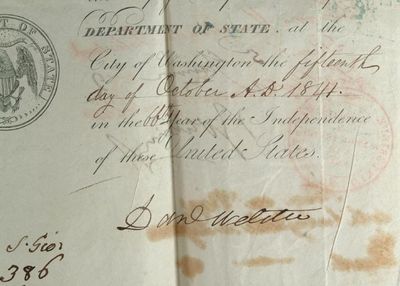 by WEBSTER, Daniel
1841. [WEBSTER, Daniel, and Edward Everett, signed]. AN AMERICAN PASSPORT SIGNED BY DANIEL WEBSTER AND EDWARD EVERETT, CA. 1841. Red leather folding case with tabbed closure, 16.2 x 10.5 cm. Spine sunned, moderate wear and soil to covers. "F. Bacon's Passport" in gilt lettering on front cover. Affixed to front pastedown is a folded four page document, the actual printed passport of the United States of America, 42 x 25.5 cm. The first page is the printed document, with the bearer's name and description inked in, and with Daniel Webster's signature as Secretary of State to bottom right corner. The space for the bearer's signature is blank, under which is the signature of Henry Ledyard. Edward Everett, the U.S. Minister to Great Britain at that time, who was stationed at London, and Webster's eventual successor as Secretary of State, signed on the verso at the top left corner. Travels from 1841-1842 in England, France and Italy are documented, with the appropriate stamps, in the subsequent 20 pages; the rest of the booklet is blank. Bacon's wife, Ann Devon, is also listed on the passport proper. An interesting piece of mid-19th century ephemera. (Inventory #: 83662)
$2,000.00 add to cart Available from
Boston Book Company
Share this item