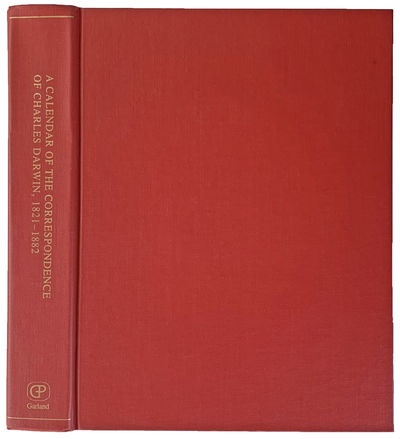 by DARWIN, Charles (1809-1882); BURKHARDT, Frederick (1913-2007); Sydney SMITH (1911-) (eds.).
New York and London:: Garland, 1985., 1985. Series: Garland Reference Library of the Humanities, Vol. 369. 4to. 690 pp. Port. of Darwin, index; small tick-mark in one margin, otherwise clean. Red cloth, gilt-stamped spine title. Burndy bookplate. Near fine. ISBN: 0824092244 First edition, noting that a 46-page supplement, with a reprinting the original, was issued in 1994. Frederick Burkhardt was for many years the President Emeritus of the American Council of Learned Societies. His decades of work on The Correspondence of Charles Darwin constituted a signal example of dedication to a demanding and ambitious scholarly enterprise. He was an Honorary Fellow of Clare Hall, Cambridge. (Inventory #: BL1509)
$110.00 add to cart Available from
Jeff Weber Rare Books
Share this item