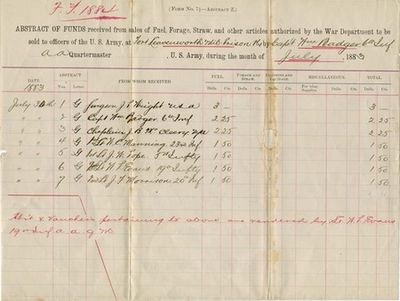 by FORT LEAVENWORTH
The son of a New Hampshire Governor, Badger fought in the Civil War. After that war, he was commissioned a lieutenant, assigned to the 6th Regiment of U.S. Infantry. Often stationed in Indian territory, he was later brevetted a captain for "gallant and meritorious services during the war." DS. 1pg. 11" x 16". 1883. Fort Leavenworth, KS. A partly printed document signed "Wm. Badger", the great military officer. It reads: "ABSTRACT OF FUNDS received from sales of Fuel, Forage, Straw, and other articles authorized by the War Department to be sold to officers of the U.S. Army, at Fort Leavenworth Mil. Prison, KS by Capt. Wm. Badge, 6th Inf. AA, Quartermaster... U.S. Army, during the month of July, 1883." The document goes on to list the various amounts of many paid by the different military officers for fuel, totaling $13.50. The document is in fine condition, with some toning and folds separations (Inventory #: 1278)
$100.00 add to cart Available from
Stuart Lutz, Historic Documents, Inc.
Share this item