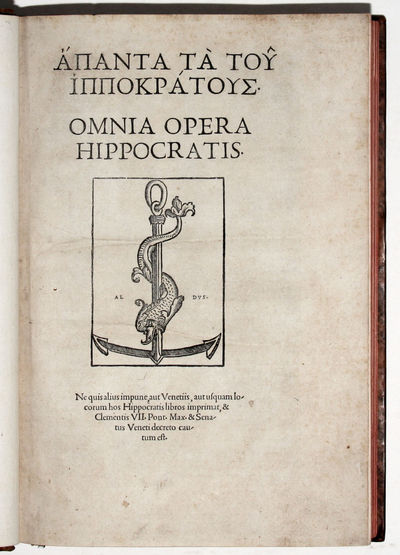 by HIPPOCRATES
Venice: Aldine Press, 1526. A fine and fresh copy of the editio princeps of the Hippocratic corpus, a collection of texts assembled in the third century B.C., including the Hippocratic Oath and many of the foundation texts of western medicine, traditionally attributed to the legendary physician and teacher Hippocrates of Cos. "It is uncertain which of them, if any, are directly connected with the historical physician Hippocrates of Cos, who flourished in the latter half of the fifth century B.C. Through the writings attributed to him Hippocrates is credited with developing the first system of empirical medicine based on clinical experience, and the Hippocratic Oath has long been regarded as expressing the fundamental ethical and moral standards of the medical profession" (Grolier, Medicine p. 3). The text was edited by Francesco Torresani, using a fifteenth-century manuscript now in Paris (BNF MS gr. 2141), with corrections provided by a second manuscript which belonged to Cardinal Bessarion (Venice, Bibliotheca Marciana MS gr. 269). This edition, comprising 59 works, includes some that were not included in the Latin translation by Marco Fabio Calvo published the previous year in Rome. "The Aldine Greek edition of Hippocrates marked a significant advance over Calvus’s Latin translation. As Franciscus Asulanus [Francesco Torresani] pointed out in his notice to the reader, it repaired a considerable number of accidental omissions and one long repetition that Calvus... made because he followed only one manuscript. Moreover, by presenting the original text, it laid the necessary foundation for all further philological and medical study of the corpus" (ibid).* Adams H-563; Durling 2316; Grolier, Medicine 1B; Stillwell 405 (with a detailed listing of contents) and 656; Norman 1077; Osler 142; Wellcome 3173.. Folio, (6), 233, (1) ff., the Aldine device on title and verso of last leaf, Greek type. Bound in eighteenth-century French mottled calf, gilt spine, brown morocco label. Title with some very slight marginal dustsoiling, else excellent. (Inventory #: 3111)
$95,000.00 add to cart Available from Martayan Lan
Share this item
Martayan Lan, Inc.
Offered by