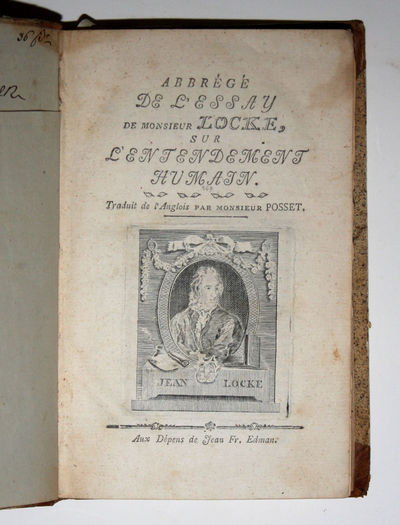 by [LOCKE, John.]
Uppsala: Veuve du directeur Jean Edman, 1792. Rare French edition printed in Uppsala of the abridgement of the Essay on Human Understanding by John Wynne, the format in which Locke's thought was most effectively popularized at English universities and in Europe. "In the last decade of the seventeenth century, English culture held a frustrated fascination for the continental Republic of Letters. Frustrated, because few Europeans could approach English ideas in the English language. Gabriel Bonno1 has shown how Locke's continental readers were dependent initially upon reviews in French-language journals – Basnage de Beauval's Histoire des ouvrages des savans, Bernard's Nouvelles de la r�publique des lettres, and (particularly) Le Clerc's Biblioth�que universelle and its successors. Interested parties such as Limborch and Leibniz did not really come to grips with the Essay until it had been translated into French. This was accomplished in 1700 by Pierre Coste.Coste was, like Le Clerc, a French Protestant refugee in Holland. In 1695, he translated Locke's Some thoughts concerning education into French and sent the author a copy. Locke was pleased, and Le Clerc encouraged the young man to begin translating the Essay. In 1697, Coste was invited to Locke's retreat at Oates, as tutor to the Masham children and as Locke's assistant. The translation was completed under Locke's supervision and was published in June 1700, prefaced with Locke's recommendation. Coste remained at Oates until Locke's death in 1704. Thereafter, in the midst of a busy literary career, he continued his work on the Essay, bringing out a revised edition in 1729." (Attig)The first French edition of Wynne's abridged Essay came out in 1720, translated by Jean-Paul Bosset, and with the first book given in Le Clerk's summary (reprinted from his 1690 Bibliot�que universelle) rather than Wynne's. It was published several times in London (1720, 1741, 1746, 1751), as well as Geneva (1738, 1741, 1788), Dresden (1788), and finally Uppsala (1792).OCLC: Harvard, UCLA, York.*Hollis record.. 8vo [17 x 11], x pp. including title with half-page engraved portrait of Locke, 284, [4] pp. Bound in contemporary half calf and speckled boards, gilt morocco title label and raised bands on spine, spine and corners of covers worn, old ownership inscription on front end pastedown, light toning throughout, very good. (Inventory #: 3890)
$450.00 add to cart Available from Martayan Lan
Share this item
Martayan Lan, Inc.
Offered by