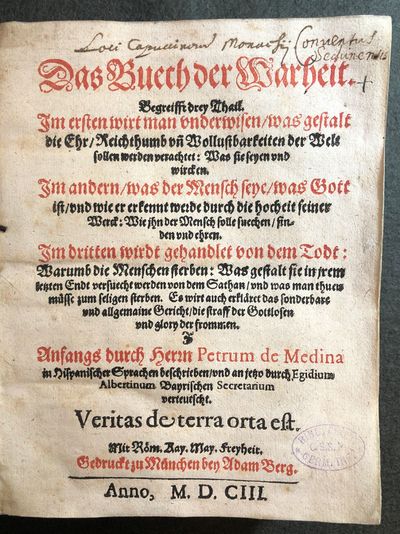 by MEDINA, Pedro de and Aegidius ALBERTINUS
Munich: Adam Berg, 1603. Bound with: OSUNA, Francisco de and ALBERTINUS. Spiegel der Reichen. Munich: Nicolaus Heinrich, 1603. Bound with: DALNER, Andreas. Ein Tractat: Von Auffruhr od[er] Empörungen auß Geistl- und Weltlichen Historien... Ingolstadt: Andreas Angermaier, 1601. I: [12], 207, [4], [1 blank] ff. Title printed in red and black. Woodcut headpiece with hunters, other type-ornament head and tail-pieces. II: [4], "91" [recte 88] ff. Woodcut head- and tail-pieces and initials. III: [8], 48 pp. Three volumes, 4to, bound in one (183 x 144 mm.) Mostly light dampstain to about 50 ff. in mid-volume, marginal wormhole in last few leaves. Contemporary parchment over pasteboards, edges blue-stained (worn and soiled, backstrip defective). Provenance: Capuchins of Sion, 18th-century inscription on title; Redemptorist Congregation of Trier, inkstamp, shelfmark label dated 1928 with deaccession stamp.***Two treatises of spiritual edification adapted from the Spanish and substantially added to by the indefatigable Counter-Reformation translator and compiler Aegidius Albertinus, bound with a legal-historical treatise on revolts and rebellions. I. First Edition. Medina's Libro de la verdad (1555) is a dialogue between Man and Truth (a virgin), who instructs her interlocutor in the Ars moriendi by preaching contemptus mundi, dwelling on the illusoriness of earthly goods in order to prepare the man (i.e., the reader) for death and the Last Judgment. Of the three parts of Medina's original work, Albertinus' translation includes all of part I and extracts from parts II and III. He added three chapters, on confession and on honoring the saints. The Spanish original was given to Albertinus by the well-traveled Ritter Sebastian von Haunsperg (who later built Schloss Schwindegg in Bavaria), to whom Albertinus dedicated the work, including in his dedication a detailed account of Von Haunsperg's voyage to Palestine.Born at Deventer as Jelle Abertszoon, librarian and later secretary to Maximilian I, Elector and Duke of Bavaria, Albertinus published over 50 devotional and moralistic works, largely compiled directly from his own translations - nearly all constituting the earliest versions in German -- of Italian, French, and, singularly, Spanish devotional texts, courtesy books, and even picaresque novels, which he introduced into Germany. The eclecticism of his sources, his profound erudition and exceptional grasp of the nuances of the Romance languages, which he transformed into an earthy, colloquial German, made him the most influential as well as the most readable purveyor to the German-speaking lands of the Counter-Reformation dogma of the Catholic countries. VD-17 12:105873T; Dünnhaupt 210.19.1; Faber du Faur I,894 (incorrectly calling for 2 blanks at end); Van Gemert, Die Werke des Aegidius Albertinus, 4.2.20 (pp. 407-14) & pp. 199-210II. Only Edition of a spiritual guide for the wealthy, Albertinus' version of a portion (14 of the 40 chapters) of the Quinta parte del abecedario espiritual (Burgos 1542) by the Andalusian mystic Francisco de Osuna. Although the title states that the work was "durch Herrn Franciscum de Ossuna in Hispanischer Sprachen componiert, und durch Aegidium Albertinum... verteutscht," over half of the text is either Albertinus' own or a well-digested compendium of sources altered beyond recognition. Typically, many of the passages identifiably derived from Osuna were shortened or rearranged by the translator, in language often more vivid than that of the original text. Midway through the work (ff. 64r-74v) is a fragment of a school drama, a dialogue between a rich glutton and poor Lazarus. A companion edition was Albertinus' consolation book for the poor, the Trost der armen (1602), translated from the same work by Osuna, the separate publication being the publisher's wish (van Gemert, p. 196). VD17 12:106173K; Van Gemert 4.2.19 (pp. 405-7) & pp. 196-198.III. First German edition of a historical and legal treatise on social revolts, the author's own vernacular translation of his Tractatus de seditione (Vienna 1599). An Austrian jurist, Dalner matriculated from the University of Tübingen in 1585. His work was no doubt prompted by the peasant uprisings in Austria in 1595-97 (described on pp. 14-16). Dalner provides an historical survey of notorious riots and rebellions, including most of the 16th-century Bauernkriege, and uses Biblical examples for his detailed legal analysis, discussing the assignment of culpability, appropriate punishments, etc. VD17 12:105739G; Stalla, Ingolstädter Buchdruck II: 144. All three editions are rare. OCLC and Van Gemert locate a single US copy of the Buech der warheit (Yale), and none of the other two (but copies of Dalner's Latin edition at U Penn and the Newberry). (Inventory #: 2111)
$2,800.00 add to cart or Buy Direct from
Musinsky Rare Books
Share this item