Constitution and Book of Laws, Made for the Government of the Universal Negro Improvement Association, Inc., and the African Communities League., of the World. 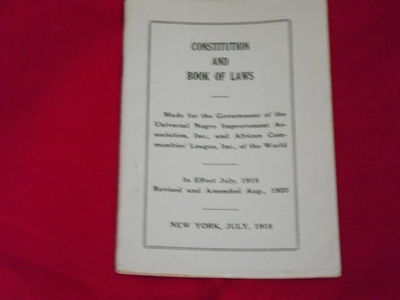 by [Garvey, Marcus].
Pamphlet, 12mo, original printed pale blue wrappers, stapled, 40 pp. Very slight aging; near fine and an exceptional copy. Marcus Garvey (1887-1940) was one of the most influential black leaders of the early 20th century. Unlike other black leaders, Garvey felt for blacks to really gain equality they would be better off going back to Africa. He was a strong champion of black separatism, feeling it was the only way to overcome racism, he even went as far as to propose alliance with white power groups, including the Ku Klux Klan (see An Appeal to the Soul of White America...). He felt the ends of the two groups were actually very similar. In 1914 Garvey founded the Universal Negro Improvement and Conservation Association and African Communities League, typically referred to as the Universal Negro Improvement Association (UNIA). This organization would probably have close to 75,000 members and would be dedicated to black advancement and uplift. Garvey was inspired by the ideas of Booker T. Washington, especially the notion of black enterprise. This pamphlet presents the by-laws of Garvey's organization, and is very scarce. The OCLC locates only two copies of this printing. While this edition is supposed to follow one published in July 1918, it is not clear if that edition was published. OCLC. ANB. #100979.