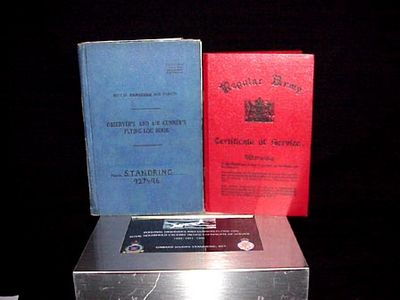 by Standring, Sgt. Gibbard Selkirk
1932. 1934.1942. (1) in plain red boards. Illustrated with a small gravure of the author. 24mo. (2) in pictorial printed red boards. Faint RAC shield embossing to front cover. Various official stamps to internals. Handwritten bibliography in rear pocket. 12mo. (3) in titled blue cloth. Ruled pages as per contemporary log type. 8vo. Privileged and refined from the Oxbridge mill house, Sgt. G.S. Standring was typical of many pilots who fought the Battle of Britain. The three items herein presented composite to a brief tale of a young fellow caught up in the hurricane of history. In item (1) we see Standring was issued his Driver's Certificate from the Royal Automobile Club - Pall Mall - in December 1932. His photo accompanies this document. Item (2) presents his service record noting in great detail his 1934 enlistment, training and service with the prestigious Royal Horse Guards of the Household Cavalry - the renowned " Blues " - based at Combermere Barracks , Windsor. This official document records Standring as being born in 1914 and now " a six foot fresh complexioned fair-haired blue eyed " chap " with a mole on his left shoulder blade". Through notes in various hands and official stamps permeating the document we observe that after a four year service with the revered Blues Regiment , Standring requests a discharge which enables him to enlist with Royal Air Force. His Colonel describes Standring in his discharge comments as " exemplary in military conduct. An exceptionally intelligent and industrious man". In May 1940 he is taken by the RAF " for duration of emergency ". Item ( 3) begins records Standring's exhaustive training and certification as Air Observer, Astro Navigator and Air Armament Observer at RAF Picton in Ontario, Canada. Several Certification documents in Navigation and Gunnery are laid down on unused pages. Standard Log format indicates through entries in ink Standring's flight time and activities ( navigation, gunnery, etc.) at RAF Picton and later recalled back home to England and assigned to A and D Flights- O.T.U. Lossiemouth ( Elgin). Concise, detailed entries of flights in Anson's, Faiery Battle's and Wellington's, criss-crossing Canada and the island of Great Britain learning the ways of aerial warfare. June 1942, Standring is at last posted to a combat squadron - the 57 - attached to the 3rd Bomber Group of Bomber Command - a hard action squadron of Wellington's and Lancaster's engaged in night bombing raids over Germany. He did not return from his eighth mission, 22 June 1942 as noted in hand by the commander of 57 squadron - " Aircraft failed to return...death presumed ". (1) and (2) are Fine copies. (3) - Covers and extremities moderately rubbed, name and serial number in ink to front cover, fore-edge , bottom edge and spine," Canadian " ink - lined out in " Royal Canadian Air Force" to front cover. A Very Good copy . A superb set of intriguing if not cruel artifacts relating to the brief life of one young warrior. (Inventory #: 5929)
$4,500.00 add to cart or Buy Direct from
Heldfond Book Gallery
Share this item

The Heldfond Book Gallery is an elected member of the Antiquarian Booksellers Association of America and the International League of Antiquarian Booksellers and conforms to all ethical codes and standards of those organizations.Books found to be materially mis-described may be returned within seven days of receipt and all monies will be promptly refunded, if returned to us in the same condition as sent.
More from this seller

The Battle of Leyte Gulf - A Gathering of Original Combat Despatches and Various Original Ephemera From History's Greatest Naval Battle.


(click for more details about The Battle of Leyte Gulf - A Gathering of Original Combat Despatches and Various Original Ephemera From History's Greatest Naval Battle.)

London. : Printed for the Author by J. Debrett. , 1794
(click for more details about A Treatise on Carriages...The Joseph T. Cunningham Copy)
View all from this seller>