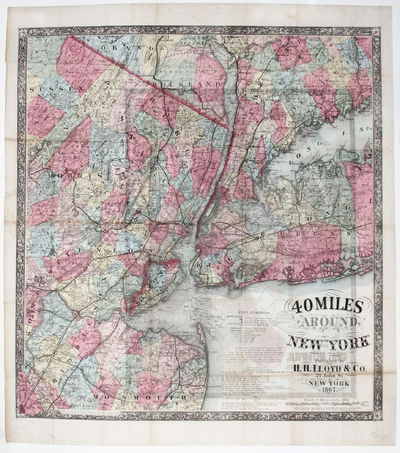 by H. H. LLOYD & CO
New York,, 1867. Hardcover. Very Good. 22 ¾ x 17 inches. With original red covers, separate; bright original color; some light offsetting, else fine condition. An unusual, scarce, two-sided map, one a large, striking map of the metropolitan region covering a radius of 40 miles in all directions from Manhattan, and the other a street plan of the city and the immediately adjoining areas. The maps, especially the former, reflect the vibrancy of the dynamic, post-Civil War city, as the city and its surrounding area can already be envisioned as an interconnected, single region, unified by a dense network of rail lines and roads. While this map still shows topography to some extent, this kind of detail has receded into the background just as its relevance had. The street plan, which also includes most of Brooklyn, Hoboken, and Jersey City, also has a transportation focus in the showing the numerous ferry routes connecting New York City and its surrounding areas. Haskell 1173. (Inventory #: 9311)
$2,850.00 add to cart Available from Martayan Lan
Share this item
Martayan Lan, Inc.
Offered by