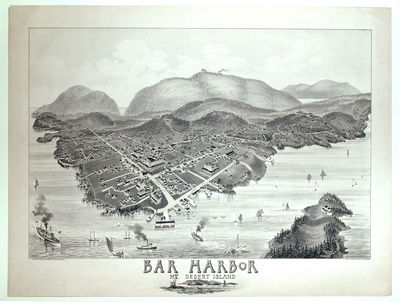 by MORRIS, G. W. / GEORGE H. WALKER & CO
Portland, ME, 1886. No Binding. Near Fine. 16 ¾ x 25 inches.. Two-stone lithograph. Few marginal mends; small duplicate stamp lower right margin; excellent to fine of this kind. A rare and beautiful view of Bar Harbor and Mt. Desert Island, evoked at the time when it was a favored summer resort of the elite of the Gilded Age. It was only one of three views of the area produced in the 19th century according to Reps and the only one published in Maine. Bar Harbor's sprawling hotels, clubs and mansions are prominently seen in the view, which depicts the town from the south from above Bar Island. The view also effectively portrays the town's dramatic natural setting with its promontory-like location and with Cadillac Mountain in background. There are, in addition, charming period details such as a locomotive chugging near the top of the mountain and an arriving paddlewheel ferry fully laden with passengers. G.W. Morris was a Portland publisher of books, postcards and other images depicting the many charms of northern New England. Reps attributes to him just the present view and one of Peak's Island, Maine, also printed by George Walker and issued in 1886. Walker's firm was established in 1882 and operated well into the 20th century. An advertisement in the 1882 Boston Business Directory describes the company as "publishers and lithographers," doing "engraving in all its branches, map engraving and photo-lithographing." Among other things, Walker issued an important atlas of Massachusetts, separate maps of Boston and its metropolitan area, and birds-eye views of tourist destinations such as Bar Harbor, Edgartown, and Lake Sunapee. This example of the view has a most interesting history. Apparently it was one of the copies deposited for copyright with the Library of Congress and was de-accessioned in recent years as a duplicate. The duplicate stamp is visible in the lower right corner, and with a lens one can just make out traces of the original deposit stamp. Reps, M.Views and Viewmakers, #1180 lists four examples of the view (Library of Congress, Bar Harbor Historical Society and elsewhere). OCLC #5447748 identifies two additional examples at the University of Illinois and Penn State. (Inventory #: 8202)
$8,500.00 add to cart Available from Martayan Lan
Share this item
Martayan Lan, Inc.
Offered by