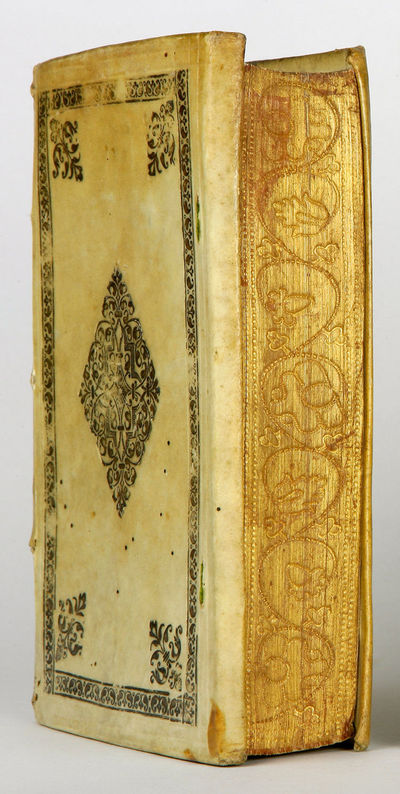 by ESTIENNE, Henri II (1531-1598)
Frankfurt am Main: [s.n.], 1595. 8vo (155 x 93 mm). [30] pp., [1 blank leaf], 560 pp. Woodcut title ornament, woodcut initials. Fresh, clean copy (single wormhole in text). Contemporary vellum tooled in silver-gilt, edges gauffered and gilt'; lacking fore-edge ties, slightly rubbed, small tear to front pastedown at gutter. Provenance: ownership inscription on title (Hermannij H L) of Hermann IV, Landgraf von Hesse (1607-1658, son of the dedicatee); Nordkirchen Castle bookplate. First Edition of Henri Estienne's "strangest work" (Schreiber), in which he exhorted to war against the Turks, in an archaizing Latin style lampooning the Flemish humanist Justus Lipsius (Joest Lips, 1547-1606). Although later recognized as the "founder of seventeenth-century neo-Stoicism" and one of the most influential Latin prose stylists of his age, during his lifetime and succeeding decades Lipsius, an ally of the Jesuits of Louvain, was harshly criticized, often no doubt for religious motives. Critics mocked not only the elliptical Tacitean Latin style that he affected in his latter years (a departure from the Ciceronian style of his early works), but also his character and supposedly inconstant religious beliefs.Estienne's satire reveals the tendency of his contemporaries to mix questions of rhetoric with religious politics, for in the middle of his literary spoof Estienne interjects a long and apparently incongruous debate on the Turks (with whom the Catholic powers were suspected of harboring an alliance), against whom he urges a war of extermination. Scaliger, as cited by Renouard, reported that this led to Estienne's book itself being ridiculed and mockingly called De Latinitate Lipsiana adversus Turcam. This copy, with its prettily tooled binding and finely gauffred edges, was inscribed by the learned Hermann (IV), Landgraf of Hesse, son of the dedicatee Moritz "the [even more] Learned" Landgraf of Hesse (1572-1632). The Schloss Nordkirchen bookplate combines the arms of Mária von Plettenberg-Wittem (1809-1861) and her husband Graf Miklós Ferenc Esterházy de Galántha (1804-1885), to whom she brought the castle (constructed in the early 18th century) as part of her dowry. Along with its "superb library," Schloss Nordkirchen passed in 1903 to Herzog Engelbert-Maria von Arenberg (1872-1949), the 9th duke of Arenberg, who also inherited his father's library; his son Engelbert-Karl (1899-1974), the 10th duke, began selling off the ducal library in 1951 (cf. Claudine Lemaire, "La bibliothèque des ducs d'Arenberg, une première approche," Liber amicorum Herman Liebaers (1984], 81-106).Adams S-1764; VD16 E-4017; Renouard 157.2; Schreiber 225. (Inventory #: 2153)
$4,000.00 add to cart or Buy Direct from
Musinsky Rare Books
Share this item