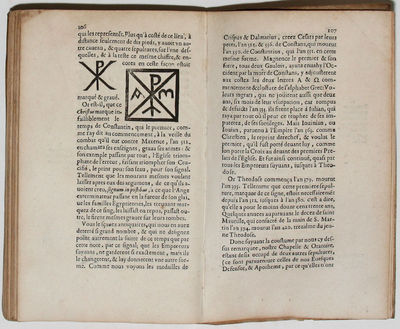 by MENARD, Claude
Angers: Antoine Hernaut, 1610. Hardcover. Near Fine. 8vo - over 7¾ - 9¾" tall. (14) ff including engraved title page by Thomas de Leu, 124 pp. Bound in contemporary vellum, title page in fine impression and text very crisply printed, an excellent copy. Extremely rare first and sole edition of this work of polemical antiquarianism, seeking to prove that the remains of St. James the Apostle are not buried at Santiago de Compostella, as Europe's most pious pilgrims had believed since the 9th century, but rather in the vaults of the chapel of St. Maurille, Angers (subsequently destroyed in 1791). An interesting and exceptionally rare example of Counter-Reformation antiquarianism, in which archaeology and considerable erudition is enrolled in the service of confessional, political or material interests. Imagine the result if the theory turned out to be correct-or even plausible: the medieval citadel of Angers, by the 17th century a provincial backwater in the Loire, would have been elevated to the third most important pilgrimmage destination in Europe-after Jerusalem and Rome. Menard relates that at the Holy Synod held in Angers in 1583 it was decided to open a mysterious tomb beneath the Chapel of St. Maurille, a 5th century bishop of Angers. As his work goes on to prove in detail, the tomb evidently belonged to none other than St. James the Greater, among the first apostles of Christ and traditionally held to have been buried at Santiago de Compostella in Northern Spain. Verified by local ecclesiastics, the discovery elicited much joy and celebration by the inhabitants of the provincial capital of Angers. Menard reveals the complex train of events which lead to Spain's false claim over St. James' relics. The apostle's grave was lost, then claimed by the Spanish under the authority of Pope Leo III: Menard gives evidence that this claim was based on false evidence, drawing on, for example, a MS in the Library of St Benoit-sur-Loire. Menard then moves on to his next logical contention: that Angers is the true resting place of St. James. Evidence in support of this ranges from the saint's 'image' at the foot of the mysterious tomb to the mosaic surrounding it which undoubtedly dates from deep antiquity. Images of the saint are apparently also found on in relief on the chairs of the choir and on a pinion near the chapel entrance. Finally, certain seals found near the tomb (reproduced in woodcut on pp 105-6) are certain to be from the time of Constantine the Great, indicating that the site existed before it was converted into a basilica for St. Maurille (d. ca. 453). Menard concludes that the current site of the Collegial de St. Maurille was originally dedicated to St. James and to St. Benoit, whose relics were 'accommodated' into the current structure. The engraved title page by the esteemed Parisian Thomas de Leu (1560-1612) was commissioned for this book, suggesting an exceptional amount of effort and expense in a provincially printed work. Already at the height of his fame as one of the most important engravers of his era, Leu was best known for his portraits - today highly sought after. The architectural title pictures the traditional badge of Compostella pilgrims (a clam shell) beneath the arms of France. The Inventaire du fonds français (seizième siècle) I.476 lists only three title-pages designed by Le Leu, of which the present is unrecorded, and no other example of Le Leu's corpus has any link to Angers. ........................................................................ OCLC records just 4 copies worldwide, none in America (BnF, Mannheim, Berlin, St. Genevieve). We have also located a copy at Angers. * OCLC 492704039 (Inventory #: 5157)
$6,850.00 add to cart Available from Martayan Lan
Share this item
Martayan Lan, Inc.
Offered by