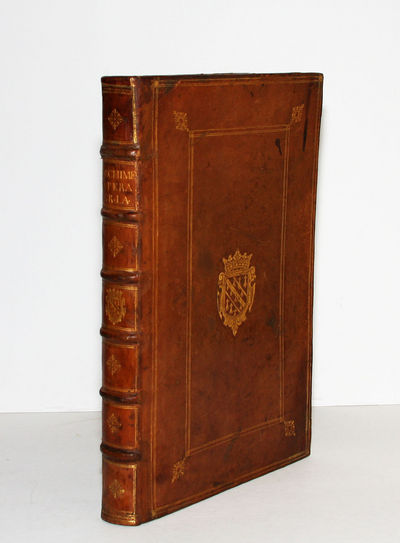 by ARCHIMEDES/ed. RIVAULT, David
Paris: Claude Morel, 1615. Hardcover. Near Fine. Folio [35 x 22.5 cm]. (22) ff., 549 (i.e. 551, with frequent misnumberings) pp., including title printed in red and black, bilingual text in Greek and Latin in two columns, and numerous woodcut diagrams and illustrations. Bound in full 17th-century calf, with unidentified gilt armorial device on both covers and gilt trim; spine in 7 compartments bearing gilt ornaments, arms, and title. Very light dampstaining touching margins of title and first few leaves; lower right corner of first few leaves repaired and following leaves dog-eared; otherwise an exceptionally clean, wide margined copy in a superb near-contemporary binding. First edition of the most influential seventeenth-century edition of Archimedes' complete works. The work contains the Greek text with a Latin "trot" running alongside and has extensive exegetical notes. It was still regarded as the best edition in 1670 when Sturm made his German translation. "The success of the humanist mathematicians in uncovering, clarifying, translating and providing commentaries on the major scientific texts of the ancient authors should not be seen as peripheral to the scientific revolution. The mastery of the Greek and Latin texts was an essential stage in the attempt to 'surpass the ancients,' and the extensive publishing of new and better-understood texts by the classical mathematicians played an integral role in the founding of the 'new sciences'" (Martin Kemp, The Science of Art, p. 76). Mathematician, courtier, and man of letters, the editor David Rivault (1571-1616) was an intimate of the great classical scholars Casaubon and Scaliger as well as a tutor to Louis XIII. * Riccardi I.43.7; Brunet I.384; DSB I.229; Nouvelle Biographie Generale XLII.338; C. Boyer, The Concept of Calculus, ch.4. (Inventory #: 5104)
$9,850.00 add to cart Available from Martayan Lan
Share this item
Martayan Lan, Inc.
Offered by