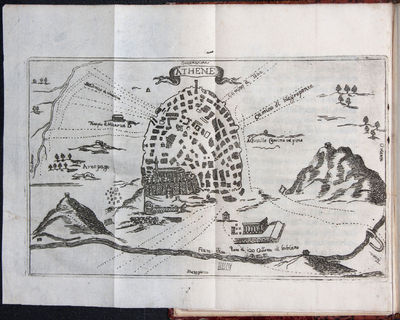 by MAGNI. Cornelio
Parma: Galeazzo Rosati, 1688. Hardcover. Very Good. 4to - over 9¾ - 12" tall. (4) ff including half-title, 135 pp, plus engraved portrait and 6 plates of Athens. Bound in old red half linen over marbled boards. Scattered foxing to margins, otherwise a very good copy, pages clean and crisp. Extremely rare first edition of this account of Athens by the Italian adventurer Cornelio Magni, one of very few accounts of that city to appear in the early modern era and one of even fewer to give accurate, up to date eyewitness illustrations of its monuments. "After the fall of Constantinople in 1453 and the Turkish conquest of Greece a few years later, Athens, and the Acropolis in particular, became virtually inaccessible to foreigners. For inspiration and examples from the classical past, the architects of the Renaissance thus relied on Roman ruins, which, though regarded as mere imitations of the Greek originals, were readily visible throughout Europe" (Middleton, "The Early Exploration of Greece"). Until the dawn of the 18th century, "classical Greek architecture was understood almost entirely on the basis of the writings of the first-century B. C. Roman architect Vitruvius.it remained no more than a literary trope, for there was no real knowledge of the architecture of Greece." Cornelio Magni was a member of a landmark expedition to Greece in 1674 led by the French ambassador Nointel. The present work deals specifically with the expedition's time in Athens and the surrounding area (including Marathon and several isolated monasteries). He includes detailed descriptions of each monument he encounters - some of which, like the Temple of Theseon - are relatively well-preserved today - but others of which, eg. the Parthenon - are not. These textual descriptions are accompanied by 6 plates depicting: 1) a folding city plan of Athens, 2) the Temple of Theseon 3) The Lantern of Demosthenes 4) The Temple of the Winds 5) The Temple of Minerva (ie the Parthenon) 6) a bust of Ceres One of the first modern Europeans to sketch these monuments, Magni appears to have had some interest in their architectural history: he notes, for example, that drawings of the Temple of the Winds were made by a certain Italian architect, Francesco Zambetti in 1465, and are preserved in the Bibliotheca Barberini in Rome; we have been unable to trace these. It is interesting to note that Magni's illustrations depict the city prior to the Venetian bombardment of Athens which destroyed or damaged many of the city's most famous monuments. Late 17th century architectural writers such as Claude Perrault and Roland Fréart (Sieur de Chambray) still relied heavily on antiquated ideas of Greek architecture, precisely because there were no modern records to discuss. Although several Westerners had made inroads into Ottoman-controlled Greece beginning in the early 17th century, Nointel specifically applied for, and was granted, permission to travel freely around Ottoman lands and brought a draughtsman with him to record both architecture and scenery in the areas he visited. It was the literary aftermath of this expedition which seems to have re-introduced modern Athens to the European readers - an illustrated account edited by Jacob Spon appearing as early as 1674, prior to Antoine des Barres' L'estat present de l'Archipel (1678). Magni appears to have published his own account in response to the growing interest in Athens evinced by his colleagues' works. OCLC shows 2 US copies, at Harvard and the Met (lacking portrait). * OCLC 19911544; compare Atabey 750; for a good overview of modern travel to Greece, cf "The Early Exploration of Greece", in preface to The Ruins of the Most Beautiful Monuments of Greece (ed Middleton). (Inventory #: 5085)
$14,500.00 add to cart Available from Martayan Lan
Share this item
Martayan Lan, Inc.
Offered by