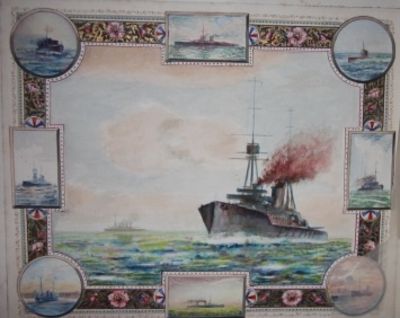 by Anonymous artist. Poem by Harold Begbie
1919. Cloth. Very Good. Patriotic World War One poem, "The Man who Keeps his Head", illuminated with exquisite vignettes. Oblong, 24.5 by 31 cm. With eight plates, including title page, plus painted vignette on final leaf. These vignette watercolors, four to eight per page, depict the diversity of British experience, whether its variety of industry, its trades, its modes of farming, its ships, etc. The effect is panoramic and epic, a visual equivalent to Noel Coward's sweep in "Cavalcade", say. Framing it all are Art Nouveau devices and ornament, very much true to the period. The book was easily of publishable quality, and its creation demonstrates that a strain of patriotism and optimism somehow withstood the bitterness and cynicism engendered by the war. Tissue guards with creases, and one with tear. Binding bowed. Other light wear. (Inventory #: 003253)
$3,500.00 add to cart Available from
White Fox Rare Books & Antiques
Share this item
White Fox Rare Books and Antiques
Offered by