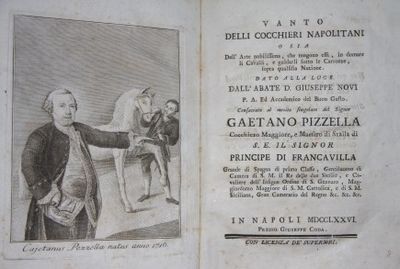 by Novi, Abate D. Giuseppe.
Napoli: Giuseppe Coda, 1776. First Edition. Paper on card (semi-hardcover). Very Good. Scarce Neapolitan equestrian title, with only five libraries appearing to have it on OCLC FirstSearch. 8vo. 20 by 15 cm. xi, 194 pp. The book is a cross between a primer on horses and coaching and a celebration of the Neapolitan tradition in particular, with special homage to Cajetanus Pezzella, a then renowned horseman and equerry to the Prince of Francavilla. The book has an element also of the hoary Italianate "mirror" book, a self-help book for rulers to gentlemen instructing them on how to behave properly and excel in their role. Novi argues in essence that the dedication of a Pezzella is a sine qua non for mastery in horsemanship while lamenting that such an accomplishment may not be rewarded with heightened social status. Of perhaps greatest interest in the work is how Novi identifies a special "code of honor" amongst the cocchieri napolitani. No less a figure than Benedetto Croce has said that this code serves as a parable of Neapolitan republican character. Light occasional foxing. (Inventory #: 003234)
$4,250.00 add to cart Available from
White Fox Rare Books & Antiques
Share this item
White Fox Rare Books and Antiques
Offered by