The World Crisis, a remarkable set of British first editions with five dated inscriptions from Churchill to his Aunt and significant annotations by her son, Churchill's Cousin, concerning the Battle of Jutland 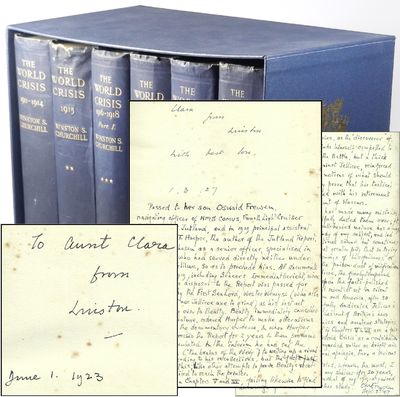 by Winston S. Churchill
London: Thornton Butterworth Limited, 1923. First edition. Hardcover. This is an extraordinary inscribed and annotated British first edition set of Churchill's history of the First World War. Each of the five books (the 1916-1918 book was issued in two volumes) is inscribed and dated by Churchill to his Aunt Clara. Clarita "Clara" Jerome Frewen (1851-1935) was the eldest sister of Churchill's mother and wife of Moreton Frewen, the famously slipshod editor of Churchill's first book, The Story of the Malakand Field Force. Three inscriptions are dated pre-publication and all five are warmly personal, with Churchill using only his first name. The inscriptions alone would make the set a prize, but it is the second family association that makes the set a unique piece of history. The books passed to Clara's son and Churchill's first cousin, Captain Oswald Moreton Frewen (1887-1958). Oswald was a career naval officer who served under Churchill's leadership as First Lord of the Admiralty during both the First and Second World Wars. Oswald participated in every naval engagement in the North Sea during the First World War, after the war helped the Admiralty prepare the official history of the Battle of Jutland, and during the Second World War served as King's Harbour Master of Scapa Flow. THE ANNOTATIONS: Of note, according to the Frewen family, Oswald's own 1916 diary "is considered to be part of the United Kingdom's national archives because of his description of the Battle of Jutland," with a claim upon the volume made by the Royal Naval Museum, Portsmouth, England. Oswald's extensive annotations in this set appear throughout the two 1916-1918 volumes and run to thousands of words. These annotations are remarkably informed and informative, sharply critical, and compellingly interesting - to both collectors and scholars. Some of Oswald's criticism may be attributed to his partisan admiration of Admiral Jellicoe, some perhaps to jealousy toward a famous cousin. Nonetheless, Oswald's comments are not without some expressed admiration for his Cousin Winston's gifts - both literary and as a leader. And tempering the sharp criticism is the knowledge that Oswald actively sought - and received - his cousin Winston's inscriptions in books that Oswald read and annotated until Oswald's death in 1958. We have transcribed the entirety of Captain Frewen's annotations, producing a 22-page document which we will provide upon request. CONDITION: This set is in sound, unrestored condition, with the original bindings firm and intact - well short of fine but of course to be prized far more for provenance and content than for condition. Five volumes are first edition, first printing. Volume I, the 1911-1914 volume, is first edition, second printing (printed only three days after publication of the first printing). The blue cloth bindings are square and tight, but show some of the scuffing endemic to the smooth navy cloth and some wear to extremities. We note the following: slight outward warping to the 1915 volume boards; some minor fraying at the head of the 1915 volume spine; minor blistering of The Aftermath cloth (to which this particular volume was prone) on the upper front cover and lower right of the spine; minor discoloration spots to The Eastern Front front cover and a wrinkle (binding error rather than blistering) in the upper rear cover cloth. Spotting is substantially confined to the page edges and first and final leaves, the heaviest instance within the set observed on the inscribed page of the 1915 volume. We note no previous ownership marks beyond the author's inscriptions and Captain Frewen's annotations. The set is housed in a navy cloth slipcase with gilt print and decoration. PROVENANCE: This set has remained in the Frewen family until now, providing both sterling provenance and a unique opportunity for collectors. Bibliographic reference: Cohen A69.2(I).d, A69.2(II).a, A69.2(III-1).a, A69.2(III-2).a, A69.2(IV).a, A69.2(V).a.; Woods/ICS A31(ab), Langworth p.105 (Inventory #: 003220)
$26,250.00 add to cart or Buy Direct from
Share this item