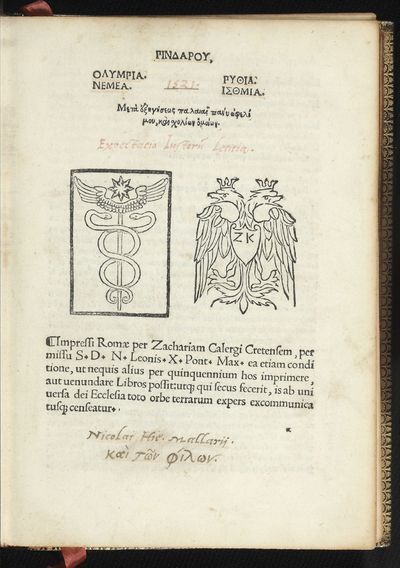 by PINDAR
Rome: Zacharias Kallierges for Cornelio Benigno, 1515. 4to (220 x 154 mm). [240] leaves, including blanks ι6 and Θ10. Woodcut devices on title of Benigno (caduceus, Kristeller 149) and Kallierges (double-headed eagle, Kristeller 206), Kallierges' device reprinted on final verso. Fols. β1 and A3 (opening pages of Olympia and Pythia respectively) with headings, woodcut initials, and a few lines and letters of text printed in red. Woodcut initials and ornaments. Occasional light spotting or foxing, minor marginal dampstaining in a few quires, most severe in quire ν, early annotations washed from fol. β1. Early 19th-century French olive morocco, sides with triple gilt fillet border, spine gold-tooled and -lettered, turn-ins and board edges gilt, gilt edges (minor rubbing to extremities, small scrape to front cover). Provenance: Nicolaus Hieronymus Mallarius [Nicolas Maillard], inscriptions on title: Latin motto Expectatio Iustoru[m] Letitia in red ink, with date 1521, and his name with Greek motto kai ton philon in brown ink; Jean Masson (1680-1750), inscription on front flyleaf stating that he received the book as a prize for Greek Oratory from the master of the College of Navarre on 20 August 1699.First Edition with the scholia, and the first Greek book printed in Rome.  Pindar was prized by humanist readers as the greatest, if one of the more difficult, of the Alexandrian poets. Their need for a correct text, accompanied by explanatory  scholia, was fulfilled by the present edition, published barely two years after the Aldine editio princeps.  The edition was printed by Zacharias Kallierges, an experienced Cretan printer formerly active in Venice, on a press set up in the splendid villa of Cardinal Agostino Chigi. Kallierges had been invited to Rome in 1514 by Pope Leo X to teach under Janus Lascaris at the newly founded Ginnasio Mediceo, the Medician Greek College. There was some competition to found a new Greek press in Rome, and Kallierges's advance on his rivals Angelo Collocci and Lascaris, who planned to set up their own press at the College in 1517, was obtained thanks to funding from Chigi's chancellor Cornelio Benigno (the money was lent by Chigi). Kallierges brought punches and matrices from Venice to print the edition, his old fonts having been left with his successor Filippo Giunta. Approximately 1000 copies were printed."The Romana is still of great value and may easily be designated the most important Pindar edition ever" (Fogelmark, p. 38). While Adams recorded three variant states, Staffan Fogelmark has discovered that in the course of production Kallierges reset as many as 10 sheets, leading to numerous permutations in the different copies. Later philologists did not realize that copies differed, an omission that distorted some of the ongoing scholarly arguments concerning the manuscript sources of Kallierges' edition. Fogelmark's bibliographical labors lead him to deduce that Kallierges had access to "at least two unrecorded (now lost) manuscripts with variant readings."  He also solved the question of the misleading colophon, which describes the first quire as a ternion (with three bifolia), whereas  in all copies but one it has two bifolia: Fogelmark argues that the first gathering was reset after Chigi pulled his patronage of the project, but it was too late to reset the colophon.This finely bound copy belonged to Nicolas Maillard, Rouen University proctor and a correspondent of Erasmus (cf. Farge, Biographical Register of Paris Doctors of Theology 323, pp. 296-301). Maillard inscribed the same Greek motto honoring friendship in his copy of the 1516 Aldine Bessarion, now at the Herzog August Bibliothek (this information thanks to Nicholas Pickwoad). The Pindar was later given as a prize for rhetoric to the French antiquarian and classical scholar Jean Masson, then aged 19.In this copy the setting of preliminary quire β is as in Adams P-1219 & 1220, and the setting of quire A as in Adams P-1221 (A1-3 unsigned, A3 with red printing). Legrand I:47; Hoffmann III:256; Adams P-1219-1221. Cf. Steffan Fogelmark, The Kallierges Pindar: A Study in Renaissance Greek Scholarship and Printing. (Inventory #: 3108)
$14,000.00 add to cart or Buy Direct from
Musinsky Rare Books
Share this item