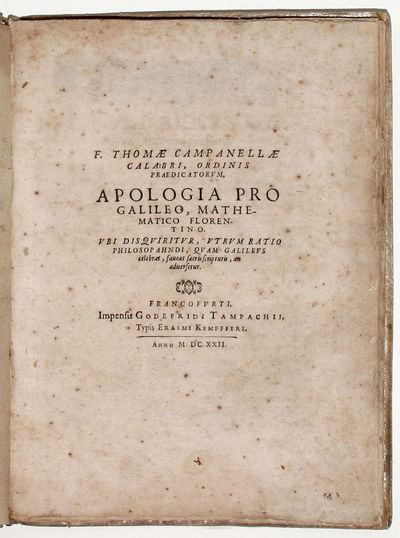 by CAMPANELLA, Tomasso
Frankfurt: Erasmus Kempffer for Godfried Tampach, 1622. Hardcover. Very Good. 4to, [23.5 x 17 cm]. 58 pp, [1 integral blank]. Bound in old vellum, rebacked with vellum spine, endpapers renewed. Pages somewhat spotted as typical of Frankfurt printings of the time, mainly untrimmed at head and foot, occasional minute restorations to blank margins. Scarce first edition of this important polemic: Campanella's contribution to the defence of Galileo, written in 1616 during the latter's first brush with the authorities but only published in 1622. The work is a spirited plea for freedom of thought (libertas philosophandi) as well as a concerted defence of the mobility of the Earth. "In addition to his interests in the astrological side of stellar phenomena, Campanella was a supporter of the Copernican system as defended by Galileo. In several works, principally the Apologia pro Galileo (1622), he sided with the embattled Florentine, not only supporting the Copernican theory but also on broader issues, including those involving the competing claims of religion and science" (DSB). The text adopts structure of a quaestio, divided into 5 chapters consisting of arguments against Galileo, their refutations, and vindications of pro-Galilean arguments. "In the Apologia, Campanella uses incisive and tightly-knit arguments while displaying an exceptionally remarkable hermeneutical skill - at times making it hard for the reader to follow without getting lost in the myriad of citations and references" (Ernst, p 164). For all its early advocacy of Copernicus, it should be noted that Campanella's tract also represents an important catalogue of contemporary objections to Galileo, dealt with item by item. Written while Campanella was still languishing in prison in Naples, the manuscript Apologia was evidently deliberately transmitted to a Protestant publishing house for publication. It bears no imprimatur much less an ecclesiastical license, and one imagines that the book's reception in Rome in 1622, written by a radical former Dominican, probably did more to cast aspersions on Galileo's case than to aid his position! According to Germana Ernst, "the treatise. enjoyed a considerable circulation in the seventeenth century and helped to connect the name of Galileo and Campanella, his 'defender'" (p 160). The work was originally sent by Campanella to Cardinal Caetani in Rome sometime before September 1616, as attested in several letters, before finally reaching the press in 1622. As he would later remind Galileo, Campanella's had been the only voice to come to Galileo's defence in print at this early date: "and recall that my text alone was published in your defence, and not the texts of others" (quoted in Ernst, p 161). The preface, purportedly written by the printer Erasmus Kempffer, betrays a deep-seated enthusiasm for heliocentrism as well as a striking familiarity with contemporary authors who discuss the Copernican doctrine. Indeed, a list is even given enumerating the pantheon of contemporary heliocentrists; when compared to Westman's list of 10 confirmed 16th century Copernicans, we find several notable additions: the German astronomer David Origan, the Venetian Platonist Franciscus Patricius, and William Gilbert and Nicholas Hill in England. The title page of the present copy does not contain the allegorical engraved border apparently found in some copies, evidently a minority. * Brunet I 1520; Cinti 150 (71); Riccardi I: 217 ("rarissimo"); cf also the definitive study by Germana Ernst, Tommaso Campanella: The Book and the Body of Nature (Springer, 2010). (Inventory #: 5009)
$15,000.00 add to cart Available from Martayan Lan
Share this item
Martayan Lan, Inc.
Offered by